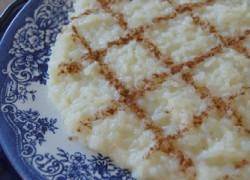 Inspired by traditional Portuguese dishes from her childhood, Maria Lawton, dubbed the “Azorean Green Bean” wrote the bestselling cookbook Azorean Cooking: From My Family Table to Yours.

Born on the Azorean island of São Miguel, in a village called Rosário da Lagoa, Lawton moved to the United States with her family when she was six years old, settling in southeastern Massachusetts. She grew up in a Portuguese enclave rich in history of fishermen, whalers, mills and manufacturing. In the neighborhood there were Portuguese bakeries, butchers and restaurants preparing traditional Portuguese food, so she had many influences for her future recipes.

In a three-family house, where her mother could be found cooking on the first floor and her grandmother baking on the second, Lawton claims her mother didn’t like anyone watching her cook, so, as a little girl, Lawton often hid behind her grandmother’s apron to secretly witness the Azorean culinary magic as ingredients were mixed and chopped and baked in a large oven.

Lawton had so many memories of going up and down the stairs to get tastes of food that she didn’t fully appreciate those special times until they were well in the past. This spring, the “Azorean Green Bean” kindly agreed to answer a few questions for the Portuguese American Journal about her life, her Azorean heritage and the magic of cooking.

Q: You’re the author of a popular Azorean cookbook—how did you decide what to include?

A: It was actually a very hard decision to make on which recipe would make the cut for the book.  I tried picking those that were close to my heart, but in all actuality they all touch my heart. It’s not just a recipe, it’s recreating food memories.

When I finally finished my first cookbook, I knew I would be writing several more. So little by little all those that didn’t make it, will find their way into another cookbook of mine.

Q: I organize the literary reading series “Kale Soup for the Soul”. What are your special secrets for this particular Portuguese staple?

A: Kale Soup is truly one of those dishes that can be considered our soul food. I grew up having different variations of kale soup. My mom would make her soup based on what she had on hand. So, I really think there is no wrong or right on what ingredients. On some occasions she would add beans and then would only puree some of beans into the broth…  To this day, I still enjoy doing that. 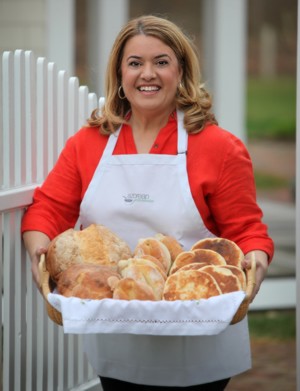 Q: How did you get your nickname “Azorean Green Bean”?

A: This name came from being picked on while going to school after my family emigrated from São Miguel. I was called many names (portugee, greenhorn, fava bean etc…) since I was different than the other children. But I never let those names hurt me or make me less than who I am. I was raised by very strong parents and grandparents, and they taught me to be very proud of who I am, so call me what you may… I knew I came from a wonderful family with an amazing heritage.  So you can call me the “Azorean Green Bean”… I wear that name with pride.

Q: Your book is a bestseller on Amazon.com. Have you been happy with your success as an author?

A: I have been very happy with its success and surprised as well! I never thought in a million years that my book would be a best-seller in the United States as well as Canada. That I would be hearing from people from all over the world just how much my cookbook has touched their hearts is amazing…. Just the other day I heard from someone in Indonesia who had lost her family recipes and was brought to tears when she received my cookbook and saw the same recipes her grandmother would make for her. It’s those stories that inspire me to continue to write and share with others.

Q: Do you participate in book signings and cooking events?

A: I have done several book signings both open to the public as well as private groups and organizations.  As for cooking events, I have been part of large events as well as smaller personal events.  The largest being the Working Waterfront Festival where I cooked in front of 100+, and the smallest being a fundraiser for a local hospital, where the grand prize for the winner was a meal cooked by me for the winner and their friends.  It raised a lot of money for the non-profit as well as having lots of fun!!

Q: How do you preserve the culture and the food heritage of the Azores?

A: Reconnecting people to recipes they grew up with and thought they would never have again. I also receive several messages from those that have never thought of reconnecting to their Azorean roots, and after reading my cookbook are planning their trip to their grandparents or parents Island for the first time… That truly touches my heart when I hear that . I believe we have to know where we came from to see where we can go next. We need to know… It’s that explorer in all of us… It’s deep into our DNA and we need to embrace it with open arms.

Q: As a huge fan of American food guru Anthony Bourdain, I was disappointed with the episode when he went to the Azores. Do you follow any food “stars” on television?

A: I love Ina Garten, on the Food Network television show “The Barefoot Contessa”, she is such a classy lady and you can see how much love and thought she puts into her meals. As for Mr. Bourdain, he disappointed me as well… he was rude and when I was watching the episode I felt like he did it with his eyes closed!! How could he not see what was around him… Maybe we need to invite him again, but this time you and I should show him around!! Now that would be a great show that I think lots of people would tune in for…

Q: When you go back home to the Azores Portugal, what foodstuffs do you crave?

A: A must is always bringing back pineapples and several boxes of Queijadas da Vila Franca do Campo do Morgado.

Q: What was a childhood favorite?

A: For breakfast it was papas… for lunch it was pop filled with meats and vegetables…for dinner it was liver and onions over rice and for dessert it was always rice pudding!!

Q: My grandparents came from the Azores to New Bedford (then to California), but I remember summers spent with my cousins on the East Coast. What did you like best about growing up in a Portuguese neighborhood?

A:  The sense of community we had. I lived and grew up in the south end of New Bedford and within a few blocks from where my family lived and within walking distance, we had the Portuguese bakery, fish market, meat market, fabric store, furniture store, church, clothing and gift shops…Everyone in the neighborhood knew each other and we watched out for each other.

Q: What are you working on now? A second book? Any events planned for summer or fall 2015?

A: So much stuff…. from book talks and book-signings to working on my second cookbook, as well as doing cooking videos. I’m having lots of fun doing that!! Also, I have been asked to do a cooking show pilot, which should be filmed in the next few months. I am also A planning a cooking and food tour in the Azores. So all in all… I will be very busy!!

Q: Has there been a family recipe you could not replicate? Perhaps a “lost dish”?

A: No, with enough time and experimentation, I have been able to replicate. Please note that on some recipes… it took me several attempts to get it right!!

A: Because I have so many favorites, this is not a fair question. Ok… the recipe that makes my house smell like my mom is in the kitchen cooking on a Sunday afternoon is my favorite!!

Q: Can you share a recipe with Portuguese American Journal readers?

A: Ever since I was a little girl, my favorite dessert was always Rice Pudding!! My mom would only make it for special occasions. But for our birthdays, she would make or bake whatever the birthday person wanted. For the rest of my siblings they would want a special cake…. but I always wanted sweet rice. So I always felt extra special on my birthday knowing we were all having some rice pudding for dessert that evening!! To this day, I will pass on a slice of cake for Arroz Doce…

Make sure your rice is rinsed and soaking in water for about an hour before you begin making the pudding.

In a medium saucepan bring to a boil the rice, water, butter and lemon peels. Then lower the heat and continue to simmer until all the water has been completely absorbed. Making sure to stir occasionally, so the rice does not stick to the pan.  Then remove the lemon peels.

In a separate medium saucepan, heat the milk until almost at a boil and pour to rice, add the sugar and stir everything together and bring everything to a boil again. Then lower the heat and constantly stir until the rice has absorbed all the liquid. This takes about 30 to 45 minutes or until the rice has thickened to the point that if you take your spoon, you can separate the rice long enough to see the bottom of the pan. At this time you will need to sample the rice and see if it has cooked. If it hasn’t you will need to add another 1 cup of very hot milk to it and stir again until it has been completely absorbed again.

In a separate bowl you’ll need to separate your eggs, since you will only be using the egg yolks. Beat the egg yolks and once the rice is cooked, you will add a couple of heaping spoonfuls of rice to the egg yolks, one spoonful at a time. Then you will incorporate the egg mixture back into the rice pan and cook for another 5-10 minutes so that the eggs can cook.

NOTE: It is very important to follow these steps and not just put the egg yolks into the rice. If you do the eggs will cook and you will have scrambled eggs.

Last step is to pour rice pudding in serving dishes and decorate with cinnamon.