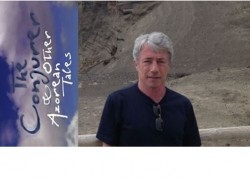 Portuguese American author Darrell Kastin is a winner of the 2014 USA Best Books Awards, in the Fiction/Multicultural category, for his short story collection The Conjurer and other Azorean Tales (2012) published by Tagus Press.

Now in its 12th year, the USA Best Book Awards is one of the largest mainstream book award competitions in the United States.

A poet and a composer, Darrell Kastin, 57, was born in Los Angeles, California, of Azorean and Russian-Jewish descent.  After a family reunion on the islands in 1972, he was captivated by the Azores lore and history and has spent time visiting the islands.

His debut novel, The Undiscovered Island, published in 2009, is set on the islands of Faial and Pico in the time period around 1985-87.

Kastin was the winner of the 2010 IPPY Independent Publisher’s Award for Multicultural Fiction Adult. His fiction has appeared in The Seattle Review, The Crescent Review, The Windsor Review, The Blue Mesa Review, the NEO Magazine and Gávea-Brown.

Kastin is currently finishing a new book titled, A Tale of the Azorean Nights, a novel of interconnected stories, which could be called a sequel to The Undiscovered Island.