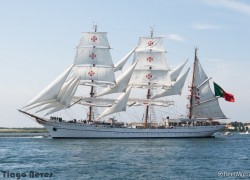 The NRP Sagres training ship docked at Halifax, Nova Scotia, Canada, last week on its latest Grande Viagem tour of the North America Atlantic coast. The visit is part of a number of events aimed at boosting Portugal’s diplomatic profile in North America.

The vessel spent three days at the Halifax harbor (June 17-20), allowing the public to visit before departing for Florida. A reception, held on June 18, included provincial and municipal government officials, business leaders, Canadian military and members of the Portuguese-Canadian community.

The ship is now scheduled to dock at Fort Lauderdale, Miami, Florida, on July 1-5. It will be open to the public July 2-4 at Baywalk Park (Bicentennial Park Pier) before heading to Willemstad, Curaçao, for the 2018 Velas Latinamérica regatta.

Velas LatinAmérica  regatta will see a fleet of at least 12 Class A naval tall ships come together to sail over 12,000 nautical miles across 157 days, visiting 18 festivals in 12 South America countries.

NPR Sagres will then return to Portugal, docking in the Azores at Praia da Vitória and Ponta Delgada, heading to Faro, Algarve, before arriving in Lisbon September 5, 2018.

The stop in Boston coincided with the visit by Portugal’s President Marcelo Rebelo de Sousa who presided at the celbrations of Dia de Portugal activities June 10 accompanied of Prime Minister António Costa and Vasco Cordeiro the President of the Government of the Azores.

Later in the day, President Rebelo the Sousa was honored by the resident Portuguese American community of Rhode Island with a dinner at the Capital Grille Restaurant in Providence. He was the guest of honor at the “Water Fire and Portuguese Street Festival” at the Water Place Park down town Providence.

In Boston, the President signed a series of study exchange agreements between the University of Massachusetts and several Portuguese universities. He returned to the USA June 26-27, closing Mês de Portugal  in Washington DC with a visit to the White House at the invitation of  President Donald Trump. Another visit to the United States is scheduled for November 2018.

Prime Minister António Costa had visited Ontario and Québec in May, followed by a visit to Massachusetts and California in June. Vasco Cordeiro, the President of the Government of the Azores, also visited Canada and the United States during May and June.

While in Canada, Prime Minister Costa and Canadian Prime Minister Justin Trudeau signed a Youth Mobility Arrangement. The agreement will ease work and travel regulations for youth aged 18 to 35 years through programs such as the International Experience Canada work permit pool.

Since 1962, NRP Sagres has visited more than 60 countries and it has circumnavigated the globe three times: 1978-79, 1983-84 and 2010. The vessel serves various functions including the training of cadets and future naval officers; as well as operating as a floating embassy to support diplomatic and diasporic efforts around the world.

NPR Sagres is a three-masted, 22-sail barque built by Blohm & Voss and launched in Germany as the “Albert Leo Schlageter” in 1937. It was acquired by the United States as part of war reparations after World War II and sold to the Brazilian navy in 1948. It sailed as the “Guanabara” until it was sold in 1961 to Portugal as a replacement for its training ship also called Sagres. It measures 89 meters (292 feet) and its main mast reaches 42 meters (138 feet) above the deck.

It is estimated that around 1.5 million people living in the United States are of Portuguese ancestry. According to Statistics Canada’s 2016 census results, over 480,000 Canadians reported Portuguese ethnicity.