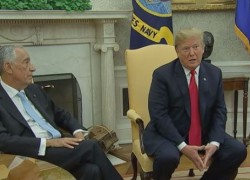 In their private meeting, President Trump and President Rebelo de Sousa talked about the economy, trade and global security.

“I don’t know if you know it, but your Founding Fathers celebrated independence with our wine – with Madeira wine,” Rebelo de Sousa said. “They made a toast with our Madeira wine.”

The two leaders ended their conversation on a lighter note talking about Cristiano Ronaldo and the World Cup:

“Don’t forget that Portugal has the best player in the world – Cristiano Ronaldo,” Trump said. “I’m sure your son knows him. And if you ever go to Russia during the championship, don’t forget Portugal is still there and wants to win. We are doing very well.”

“He is the best in the world,” President Rebelo de Sousa said.

After leaving the White House, President Rebelo de Sousa was the guest of honor at the “Toast to America” event organized by the Portuguese Embassy.

The visit marked the conclusion of the initiative “June Month of Portugal” in the United States, a month-long celebration of the Portuguese-American heritage. The celebrations featuring cultural, artistic, economic and scientific events took place across the country, coast to coast, in 60 cities in 12 states.

For the occasion, on June 10-11 the President of Portugal visited the New England where he met with Portuguese communities in Massachusetts and Rhode Island.

Before visiting to Washington, today, the President of Portugal, a constitutional lawyer by training, met with Vladimir Putin, the President the Russian Federation, on Wednesday, June 20, in Moscow.