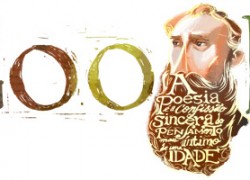 Portugal-based Google search engine users were surprised Wednesday to find a “doodle” of Portuguese poet Antero de Quental on the 100 anniversary of his birth.

Born in Ponta Delgada, Azores, on April 18, 1842, Antero de Quental distinguished himself as a philosopher, poet, writer and social activist.

A leader of the 19th century socialist ideals, he enrolled at the University of Coimbra, in 1856, where he engaged on political activism and became legendary for his eccentric romantic inclination. He traveled abroad and visited the United States briefly in 1868.

Afflicted by depression, he returned to the Azores later in life where he committed suicide on September 11, 1891. He is particularly revered for his sonnets translated in many languages.