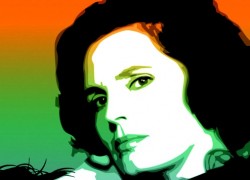 Doodles are known as the decorative changes that are made to the Google logo to celebrate holidays, anniversaries, and the lives of famous artists and scientists.

Those who clicked on Google-Portugal doodle Saturday found links directing them to websites and YouTube videos featuring the Portuguese diva.

The goal was to honor Amália Rodrigues on her birthday. Amália, who died on October 6, 1999, would have been 91 yesterday. Or would she?

Apparently, according to Amália, nobody in her family knew exactly on which day she was born. She used to say that her mother had forgotten to register and that, after sometime, no one could remember the exact day of her birth.

Amália Rodrigues (1920-1999) was born in Lisbon, Portugal to a poor and numerous family. Since her childhood she showed a talent for singing. She debuted formally in 1939 at 19 years old, becoming a great success both in Portugal and abroad. During her last years, Amália received countless tributes inside and outside of Portugal. President of Portugal Mário Soares honored her and the Pope John Paul II received her in a private audience at the Vatican. She died in her sleep at her home in Lisbon on October 6, 1999.

Over the years, doodles on the Google homepage have made searching on Google more fun and enjoyable for its users worldwide. When doodles were first created, nobody had anticipated how popular and integral they would become to the Google search experience. Nowadays, many users excitedly anticipate the release of each new doodle and some even collect them. See the Google-Doodle collection >>