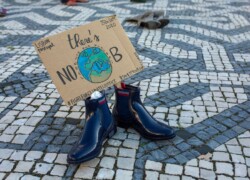 Portugal and all the other member states of the European Union have just been presented with an ambitious new climate change plan formulated by the EU Commission that hopes to influence other major countries in the lead up and during the crucial Cop-26 climate summit conference in Glasgow this November.

The plan comprises a dozen detailed draft proposals that seek to drastically cut the use of fossil fuels and reduce greenhouse gas emissions from 1990 levels by 55% between now and 2030. It wants to achieve net zero emissions by 2050.

To achieve this, the plan is to start taxing high-carbon aviation and shipping fuel, as well as imposing “border tariffs” on imported carbon- emitting materials such as cement, steel and aluminium.

The intention is also to ban the sale of petrol and diesel powered cars within the next 14 years.

Agreement on all this is not going to happen in a hurry. The 27 EU governments and the EU parliament are expected to take months if not a couple of years to reach agreement and ratify a joint plan.

Opposition has already started rolling in because the proposals would mean rises in the costs of domestic heating, transportation and manufacturing. Every EU citizen is likely to experience extra expense of some kind.

“We do it to give humanity a fighting chance.”

The director of the Potsdam Institute for Climate Research in Germany, Ottmar Edenholmer, said: “Weather extremes around the world clearly illustrate that strong action is key now if we want to limits costs and risks and secure a safe future for all.”

Release of the proposals coincided with temperatures in California soaring to the highest ever recorded on the planet; viscous heat waves were sweltering Russia and Canada; typhoons were sweeping through the tropics; incredible rainfall and flooding were devastating families and homes in Germany and its western neighbours.

Scientists put it all down to climate change.

Yet the EU Commission’s plan came under immediate attack by industrialists both within the EU and abroad because of the inevitable cost rises the proposals would cause.

Environmental campaigners on the other hand complained about the contents of the plan being too weak.

Even on such a fundamental issue as climate change and the future of humanity, many strong-minded individuals, communities and governments are very much out of step with each other. There is no clear global unanimity in sight.

The EU Commission plan may not be perfect, but it’s the best set out so far.