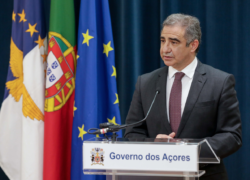 The President of the Government of the Azores, José Manuel Bolieiro, will travel to Canada, at the invitation of the Federation of Portuguese Canadian Business & Professionals (FPCBP), to participate in the 39th Annual Scholarships & Excellence Awards Gala of the organization.

The official visit, which takes place on May 28, at the Pearson Convention Centre, in Brampton, Ontario, will recognize five community leaders and entrepreneurs, and will award 35 scholarships to Portuguese Canadian students.

President Bolieiro will be the guest of honor at the event where Louis de Melo, Health Foundation Executive Director (CEO), will be the keynote speaker at the ceremony also celebrating the  FPCBP 40th anniversary, attended by about 300 guests.

Vice president of the Pearson Convention Centre, Fernando Branco, will be distinguished with the Business Excellence Award; Attorney Kim Ferreira will be recognized with the Professional Excellence Award; Philanthropist Ema Dantas, will be honored with the Humanitarian Award; Musician and singer Shawn Desman, winner of a Canadian Music Award (Juno Award) in 2006, will be the recipient of the New Generation Award; and Educator Celina de Melo, a teacher of Portuguese, will receive the Civic Commitment Award.