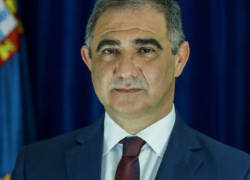 The new Regional Government of the Azores will be inaugurated on Tuesday, November 24th.

According to the Azorean parliament announcement, “The formal session of the inauguration of the XIII Regional Government of the Azores will take place on the 24th of November 2020, at 15:00 [local, 16:00 in Lisbon], at the seat of the Legislative Assembly of the Autonomous Region of the Azores, in the city of Horta [Faial].”

The inaugural ceremonies, presided by Ambassador Pedro Catarino, Portugal’s central government representative in the Azores, “will take place in a different way than usual” due to the “current pandemic context in the region,” with a reduced number of guests “without an official dinner”-  it added.

The October elections also determine the composition of the new Legislative Assembly of the Autonomous Region comprised of 57 members.

Deputy Luís Garcia (PSD) is the new president of the Legislative Assembly of the Autonomous Region of the Azores, the new president succeeds Ana Luís (PS), who headed the Azorean parliament since 2012. Artur Lima (PSD) will serve as vice-president.

Outgoing President Vasco Cordeiro, the leader of the region Socialist Party (PS), lost the ruling majority he held since 2012, failing to form a left-leaning governing coalition. He won 39,13% of votes, seizing 25 deputies, 5 seats fewer than 2016 and 4 seats short of a majority.

President-elect Bolieiro, the former Mayor of Ponta Delgada city, since 2012, is the regional leader of the Social Democrat Party (PSD). Ponta Delgada is the largest municipality of the Azores. The PSD won 33,74% of votes and formed a right-leaning coalition with the CDS-PP and PPM seizing 26 deputies. In addition to Chega (1 deputy) and the Liberal Initiative (2 deputies), they reached an absolute majority. The Left Bloc (BE) held 2 seats, the People–Animals–Nature (PAN) also seized 1 seat, as did the MP, seizing the majority of 29 deputies.

In conclusion, the new composition of the Regional Assembly gives the right-leaning parties a majority over the left, with 29 against 28. The turnout increased compared to the previous election cycle, with 45.4% of voters casting a ballot, compared with the record-low absenteeism of 40.9% in the 2016 elections.

José Manuel Cabral Dias Bolieiro, 55, a career politician, served as the he was Mayor of Ponta Delgada city from 2012 to 2020. A graduated in Law from the University of Coimbra, he was assistant to the Regional Under-Secretary for Social Communication (1989-1995); legal advisor to the President of the Regional Government of the Azores (1996); deputy to the Legislative Assembly of the Autonomous Region of the Azores (1998-2009), exercising the functions of President of the Parliamentary Group PSD and chairman of the Permanent Commission for General Policy. He was also president of the Municipal Assembly of Povoação (2002-2009) and vice-president of the Municipality of Ponta Delgada (2009-2012).