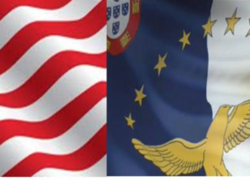 The President of the Government of the Azores, José Manuel Bolieiro, will be on a six-day visit to Massachusetts and Rhode Islands, from August 24 to August 29.

In Massachusetts, he will be the guest of honor in the celebration of the 34th Holy Ghost Festival of New England, taking place in Fall River, August 24 to 29.

António Maló de Abreu, member of the Portuguese Parliament and José Andrade, Regional Director for Communities, will be also attending as guests.

On Monday, August 29, President Bolieiro will be meeting Rhode Island Governor Daniel McKee, at the State House in Providence.

A dinner with Portuguese entrepreneurs and community leaders, in the Boston area, is also schedule for Thursday, August 25, at the Sport Club Faialense, in Cambridge, promoted in partnership with the Consulate General of Portugal in Boston.

On Sunday, August 28, President Boleiro will meet with representatives of PALCUS – Portuguese American Leadership Council of the United States.

The official program also includes the presentation of the publishing project, Bellis Azórica Bellis Series of Tagus Press, sponsored by the Government of the Azores, dedicated to promoting Azorean literature, and a visit to the exhibition of Azorean the painter Domingos Rebelo in the Whaling Museum in New Bedford.

The Bellis Azórica event, will open with remarks by President José Manuel Bolieiro and presentations by professors Mário Duarte (UMass Dartmouth) and Francisco Cota Fagundes (UMass Amherst) in the auditorium of the Whaling Museum, on Monday, August 29, at 3:00pm, in the New Bedford Whaling Museum, 18 Johnny Cake Hill, New Bedford. The event is free and open to the public.

Established in Fall River in 1986, Holy the Ghost Festival of New England, held every year on the last weekend of August, has become one of the largest ethnic festivals in New England, and the largest Portuguese religious celebration in the United States.

Thousands of people, from all over the United States and abroad, are expected to come to Kennedy Park, over the weekend to celebrate the religious tradition and enjoy Portuguese marching bands, food, including the famous Azorean sweet bread and malassadas, live music and entertainment. Admission is free.