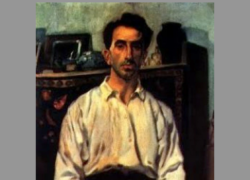 The Wattles Family Gallery, housed by the New Bedford Whaling Museum, is launching March 31 the grand opening  of the art exhibit “The Azorean Spirit: The Art of Domingos Rebêlo,” presenting a selected collection by one of the most celebrated Azorean painters.

The event culminates one of the biggest aspirations of the Azorean famous artist, of one century ago, to showcasing his work in the United States.

Organized and curated by his grandson Jorge Rebêlo, the exhibition will bring together 71 paintings and works from private and public collections in continental Portugal and the Azores. Domingos Rebêlo (1891-1975), who belongs to the first generation of Portuguese modernist painters, had a career spanning more than 60-years, creating thousands of works of art that reflected his Portuguese identity and culture and honored his Azorean roots.

A seminal exhibition on the artist, ‘The Azorean Spirit: The Art of Domingos Rebêlo’ is the first display of Rebêlo’s work to be presented in the United States.

Domingos Maria Xavier Rebêlo studied art for six years in Paris, France in the early twentieth century, meeting significant European modernist painters, poets, and collectors. Rising tensions in Europe before the outbreak of WWI prompted him to return home to the Azores and the island of Sao Miguel, where he found inspiration in depicting life on the islands, including fishermen, religious scenes, and family. Rebêlo would remain devoted to picturing domestic scenes in the Azores and Portugal for the rest of his career.

‘The Azorean Spirit: The Art of Domingos Rebêlo’ is accompanied by a 250-page, full-color, hardcover exhibition catalogue with seven scholarly essays by Portuguese and American scholars, as well as a foreword and introduction, and artist chronology. The catalogue will be published in English and in Portuguese.

Almost unknown by most tourists, Terceira is the most beautiful island in the North Atlantic.

It is one of the nine islands that make up what we know as the Azores. As an autonomous region of Portugal, Terceira Island, alongwith the other islands are truly the “Hawaii of the Atlantic.” In this book, you will discover the vast history of Terceira from its megalithic monuments to its importance in the discovery of the Americas.