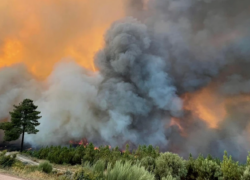 Raging wildfires have swept across parts of Portugal in recent days, causing death and destruction, and forcing thousands of people to evacuate.

On Saturday, according to Portugal’s Health Ministry, Marta Temido, 659 mainly elderly people had died of heat-related deaths, Reuters reported, while more than 60 people were injured.

Portugal has experienced an average high temperatures of 47 degrees Celsius (117 Fahrenheit) last week, as firefighters are battling blazes across the country.

As of Monday, 79 fires had been recorded in mainland Portugal, with 11 remaining active, involving 1,064 operational, 320 land assets and 16 air assets, battling ongoing wildfires, mainly in the country’s northern and center regions as reported by the Portuguese National Authority for Emergency and Civil Protection.

On Monday, almost the entire country remained on high alert for wildfires, despite a slight drop in temperatures. Fires have been raging for more than a week.

The area destroyed this year has already exceeded the total for 2021. More than 30,000 hectares (74,000 acres) of land has been burned. Authorities are anxious to avoid a repeat 2017, when 66 people were killed in fires.

In addition to the heat-related fatalities, a pilot of a firefighting plane died on Friday, when his plane crashed while on an operation in northern Portugal, near the town of Torre de Moncorvo.

An elderly couple also died on Monday, while trying to drive away from wildfires in northern Portugal. The bodies were found inside a burnt-out car after the couple tried to flee a wildfire in the municipality of Murça in northern Portugal, authorities said.

The heat wave in Portugal has intensified, due to high temperatures gripping throughout the European continent in recent weeks, where at least eight countries, from Portugal to the Balkans, have declared states of emergency or issued red alerts, namely in Spain, France, Italy, Greece, Hungary, Serbia and Croatia. More than 1,000 people were reported dead in southern Europe alone, it was reported.

In Portugal, where temperatures dropped over the weekend, the risk of wildfires remain high, according to the Portuguese Institute of Meteorology  (IPMA). One third of the mainland still remains at extreme risk of fire, according to the national meteorological office.

As the deadly heat wave is breaking temperature records, fueling wildfires, and disrupting transportation, the European Union has urged member states to prepare for more wildfires this summer as the continent faces an extreme weather shift that scientists say is being triggered by climate change.

PAJ/Staff/This developing story will be updated.