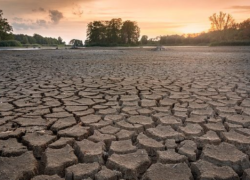 Summer has arrived with a vengeance. On top of the drought during our normally wet winter, Portugal has been unusually hot, and both the drought and the recent heat seem set to worsen.

The drought began in November 2021. The resulting low levels in the reservoirs have severely impeded hydroelectric power generation and limited supplies of irrigation water to farmers.

A systematic increase in summer temperatures is forecast with an increasing frequency, intensity and duration of heat waves in continental Portugal. Conditions are expected to be more moderate in the Azores and Madeira.

Extreme conditions are increasingly becoming the norm all across the world at all times of the year. For example, in January, fierce storms in northern Europe, including Germany, forced public transport to shut down, markets were flooded, and authorities told residents to stay at home. A town in Western Australia registered a mighty 50.7ºC.

In February, parts the United States, from New Mexico to New England, were pounded with so much snow and ice that schools had to close and thousands of flights had to be cancelled. It was one of the coldest events in the southern state of Texas in several decades.

March was the hottest month in India in 122 years. A tropical cyclone killed at least 50 people in Mozambique. Amazingly, a heat wave hit the Antarctic, spiralling temperatures from around minus 50ºC to 17.7ºC, albeit only for a few days. It shocked scientists who described the spike as unprecedented in the coldest region on the planet.

In April, winds ripped through the Philippines killing 120 people. By mid-April, the state of Alabama had received 115 tornado warnings, Mississippi 110 and Texas 104.

The month of May brought record-breaking blasts of hot air to Portugal and Spain. Some temperatures topped 40ºC and were the highest May figures for Portugal since records began in 1931. France also experienced the hottest temperatures ever for May, as did Morocco with 45.7ºC recorded in the northwest of the country. A rare subtropical cyclone swept through Uruguay and Brazil.

So far in June, many temperatures in the Algarve have been 10 degrees hotter than normal, meaning it has felt more like July or August. And with almost all of the country now suffering severe drought, no rain is expected until the autumn.

Climatologists say all this emphasises the reality of climate change due to human activity. In a world engulfed with massive problems such as war, soaring fuel and food prices, poverty and hunger, it is hard to stay focused on the climate crisis, but there is an ever increasing need to do so and instigate more urgent action to curtail global warming.

In ordinary terms, it’s wise to keep sun cream and a brimmed hat handy when about to venture outside, and have a brolly on the beach.

Meanwhile, there continues to be the ever-present danger of wildfires in Portugal, the fourth most affected country in the world when it comes to economic damage, especially in forested and well vegetated rural areas.

In winter this year, 1,741 wildfires had broken out and destroyed 7,000 hectares before the end of February. That was more than enough to warn us all of the great care that needs to be taken this summer and into autumn.

The Portuguese fire prevention and firefighting authorities all over the country are well prepared, but there is no way of being certain that wildfires will not again devastate large areas of the natural environment, destroying homes, killing residents and causing evacuations in the process. This is particularly egregious because most wildfires are caused by arsonists, or people carelessly lighting campfires or barbecues, or simply throwing cigarette butts away in the wrong places.

Len Port is a journalist and author. Born in Ireland, his first written pieces were published while he was working in the Natural History Museum, London. Since then he has worked as a news reporter, mainly in Hong Kong, Northern Ireland, South Africa and Portugal. In addition to reporting hard news for some of the world’s leading news organizations, he has produced countless feature articles on all sorts of subjects for a range of publications. Now living in southern Portugal, his books include travel guides and children’s stories. His ebooks – People in a Place Apart and The Fátima Phenomenon – Divine Grace, Delusion or Pious Fraud? are available from Amazon.com and amazon.co.uk. His blog posts can be viewed at algarvenewswatch.blogspot.com