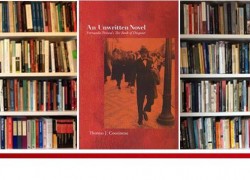 After earning a doctoral degree at the University of California, Davis, Cousineau taught at Washington College in Chestertown, Maryland for 34 years and has lectured at several French universities, including the University of Paris.  Before retiring, he taught courses and published scholarship on literary modernism, Joyce and Beckett, and literary theory.

Inspired by Ovid’s Metamorphosis, Cousineau advances a notion he calls “The Dedalus Complex,” which he claims can be found in Pessoa’s The Book of Disquiet and other modernist texts.  He explores Kenneth Burke’s assertion that “the perfection of the work, including the ‘perfecting of the victim’ is a motive underlying all narratives.”  Thereby, the ‘perfect work’ is represented by the artisan’s constructed objects, such Icarus’s wings and Minos’s labyrinth.  Accordingly, writers create ‘perfect victims’ in the form of protagonists who are displaced by or sacrificed in the creation of literary masterpieces.

Related to the grand narratives of modernist texts is T.S. Eliot’s question, “Is it true that sometimes one can only live by another’s dying?”  Eliot revisits this question in his famous essay “Tradition and the Individual Talent,” making a connection between “the man who suffers” and “the mind which creates.”  Eliot’s tragi-comic anti-heroes emulate his own aesthetic response to the modern world.

The early modernist W.B. Yeats had a similar idea on the poetic making and unmaking of imaginative possible worlds.  He was well-acquainted with the pre-Socratic philosopher Heraclitus’s gnomic fragment, “Mortals are immortals and immortals are mortals, the one living the other’s death and dying the other’s life,” which became his essential myth of a daimonic-infused universe.  Yeats summarized his philosophical outlook by saying, “To me all things are made of the conflict of two states of consciousness, beings or persons which die each other’s life, live each other’s death.”

Many modernist texts represent the tropes of living and dying, wastefulness and unholy sacrifice, and the dying gods of our myths in forms of writing that collect multiple intelligences and consciousnesses confronting a schizophrenic epoch.  Basically, modernism engages with the ethos of constructive and destructive forces of rationality.

Some writers interrogated literary, moral, metaphysical, and urban problems with partial or fragmented discursivity–equally valid among them is the squelch, scream, and silence of individual voices.  Moreover, elementary logic became a coda of literary innovation–tautologies, contradictions, fallacies, and paradoxes launch manifestos and were integrated into reactions against politics, war, rumors of war, and genocide.

Cousineau’s study attempts to unravel the Ariadne threads of Pessoa’s The Book of Disquiet by citing its existential themes, which he maintains are rooted in Dante, Shakespeare’s Hamlet, and the Dedalus myth.  Pessoa believed in a godless universe but rather than claim this condition to be meaninglessness, he says that we compensate by creating a “cult of humanity,” a dependence on scientific rationalism and materialism.

In contrast to this tendency, Pessoa’s heteronym Bernardo Soares aspired to cultivate a “cult of the superior man,” which is a Nietzschean idea that appealed to many modernist thinkers, including Yeats.  The idea drew conspicuous comparisons with Matthew Arnold’s ‘great man’ theory, based on Nietzsche’s ‘transvaluation of values’ by the Ubermensch.  For its own purposes, this view was not, as Cousineau claims, an aesthetic ideal that Pessoa found in Virgil and Dante.

Cousineau’s analysis depends heavily on his idea of “The Dedalus Complex.”  My worry is that if he’s wrong about this interpretative template, then much of his hard work in making interesting connections must be tossed out.

He rightly points out that The Book of Disquiet is a “factless autobiography” that diverges from the novel.  There are no characters, dialogue, narration, or formal plot.  In reference to “The Dedalus Complex,”  Cousineau asserts that Pessoa extols his artistic achievement in terms of “personal crisis.”  Details of place substitute for a plot, such that the narrative elements are unwritten and are deliberately mutilated or fragmented.  Pessoa’s episodes don’t cohere into a plot but are rather “modest apocalypses with an aura of timelessness.”

According to Cousineau, Pessoa’s literary predecessors are Dante, Shakespeare, and Milton. If this claim is true, I’m not sure how much mileage we get from it. After all, Harold Bloom’s psychoanalytic “anxiety of influence” isn’t as persuasive as it once was.  Nevertheless, none of the above writers experiment in “hybrid, indeterminate forms of authorship,” nor did they write in fragments, collages, or use parataxis.  And none of them eschewed novelistic forms, as Pessoa did.  If he had literary predecessors, then they were Pater, Wilde, Baudelaire, Rimbaud, Valery, and the Decadents.  These figures espoused the “dignity of tedium” and the creative ambitions of artifice.

In spite of Cousineau’s interesting analyses and insights, we cannot overlook his omissions.  Although Pessoa’s The Book of Disquiet is a significant contribution to literary modernism, it also contains a lot of philosophy.  Yeats, Pound, Eliot, Lawrence, and Woolf were respectively immersed in modern and contemporary philosophical movements.  A major event in the development of modernism was the fall of Hegelian Idealism at Cambridge and the subsequent rise of analytic or linguistic philosophy, initiated by Bertrand Russell, G.E. Moore, and Ludwig Wittgenstein.

One of the merits of Pessoa’s The Book of Disquiet is its engagement with philosophical topics, aside from its existential angst in the vein of Shakespeare’s Hamlet or its Freudian libidinal complexes.  Pessoa reported on the banality of human suffering in a cosmos with a superfluous god.  He mastered pathological ennui, the writing of dejection, and the cold anguish of urban dwelling.

As his recently published Philosophical Essays show us, Pessoa was well-acquainted with continental philosophy.  He read Descartes, Berkeley, Kant, Hegel, and Nietzsche.  He wrote on metaphysical topics: free will, mind-body dualism, space and time, immortality, and the existence of God.  None of these philosophers or topics are discussed in Cousineau’s study.

Pessoa was a decadent thinker as much as an existential dreamer who had many personalities within him.  “The Dedalus Complex” notwithstanding, he embraced the dialectical aggregate of the Apollonian and Dionysian.  In this way, Pessoa’s existentialism had more in common with Kierkegaard’s than Sartre’s, because he synthesized the multiple consciousnesses of ethical and aesthetic strands into a distressed utterance as powerful as the logos of Abraham’s God.

Pessoa’s The Book of Disquiet represents the absurd exile of mirrors and wardrobes that confine body and bodily movements on inelegant hangers of rejection and denial, similitude and dissolution, whereby the apocalyptic revelation of life’s mystery is a direct manifestation of reality from which time never awakens.  Along with Pessoa, we learn to ask, “Who among us, looking down the path of no return, can say they followed it in the right way?”