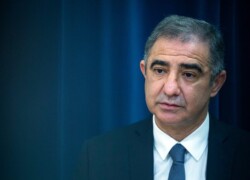 The President of the Regional Government of the Azores, José Manuel Bolieiro, declared today that the development of the Azores represents an asset for the whole country, for its contribution to the international prestige of Portugal.

Speaking at the plenary session of the Legislative Assembly of the Autonomous Region of the Azores, President Bolieiro said, “The Government of the Republic must count on the Regional Government as a development partner for the country because, yes, we contribute to the development and international prestige of Portugal.”

President Bolieiro also stressed, that the Azorean Executive wants the Government of the Republic to assume the role of “partner” and “collaborator” in the “development” of the Region, by “immediately fulfilling its commitments.”

“We are not the Government’s excuse for the guilt of others. Neither by action nor by omission, ” he added.

Addressing the slow progress concerning the building of the new Ponta Delgada Penitentiary, he said that the situation is a matter of “human rights in which the country’s prestige is at stake.”

Such claim does not represent an “exercise of opposition,” but a moment of “affirmation.” President Bolieiro said.

Referring to the Central Government many failures to address the Azorean needs, he stated that “The Assembly of the Republic, recently, in the previous legislature, has committed unanimously to approve, as a priority, the construction of the prison establishment. And what they arrived at expedients to delay what is most urgent. This parliament can and must decide on its own initiative to resolve this emergency.”

Concerning the relationship with the Central Government, it is important for the Region to bear in mind, the importance of all matters that “have been planned, approved and committed,” he reiterated.

President José Manuel Bolieiro, has stated recently that its administration is unhappy with the reduced number of COVID’19 vaccines the Government of Portugal has made available to the Azorean population, and spoke of his concern with the spread of the British variant of COVID’19 in the archipelago.

As a result, the Government of the Azores is requesting that Portugal invoke the Cooperation and Defense Agreement between the Portuguese Government and the United States, to supply vaccines against COVID’19 to the underserved Azorean population.