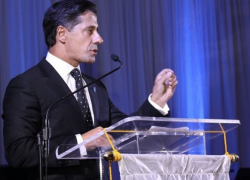 Born in Lisbon, Portugal, Mr. Carvalho immigrated to the United States at age 17 as an undocumented immigrant and day laborer.

As the new New York City schools chancellor, Mr. Carvalho will oversee the nation’s largest system, one made up of 1.1 million children, many of whom face similar challenges to those he has overcome.

“Alberto Carvalho is a world-class educator with an unmatched track record of success,” Mr. de Blasio said in a statement. “I am very confident that our extensive, national search has found New York City the best person to lead the nation’s largest school system into the future.”

He became Superintendent of the nation’s fourth largest school system in September 2008. Today he is a nationally recognized expert on school reform and finance. Miami-Dade for over a decade has had a remarkably successful record.

Miami-Dade County Public Schools has been honored with various national awards, including The Broad Prize for Education, and AP District of the Year. In 2014 he was honored by President Barack Obama and U.S. Secretary of Education Arne Duncan at a White House ceremony during the National Teacher of the Year announcement.

Earlier that year, Mr. Carvalho was selected National Superintendent of the Year by AASA, The School Superintendent’s Association. In 2012, the district won the Broad Prize for Urban Education, which recognizes districts that have shown major gains in student achievement.
“Mr. Carvalho’s appointment drew praise on Wednesday from diverse segments of the education universe,” The New York Times reported.

Mr. Carvalho has received the Hispanic Heritage Education Award and the 2013 National Child Labor Committee Ron H. Brown Award; he has been acknowledged as Visionary Leader of the Year by the Greater Miami Chamber of Commerce and South Florida’s Ultimate CEO; and he has been recognized for Leadership in Government by the Miami Chapter of the American Institute of Architects. He is a member of Florida’s Council of 100 and the Honorable Order of Kentucky Colonels.

He has been honored by the President of Portugal with the “Ordem de Mérito Civil” and by Mexico with the “Othli Award,” the highest award for a civilian living outside of Mexico. Mr. Carvalho has been featured on CNN, NBC, and ABC and in publications such as The New York Times, District Administration Magazine, and The Christian Science Monitor.