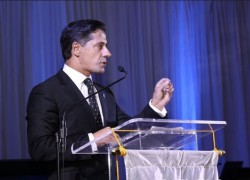 Alberto M. Carvalho, 49, Superintendent of Miami-Dade County Public Schools and National Superintendent of the Year, will be honored by President Barack Obama and U.S. Secretary of Education Arne Duncan at a White House ceremony, on May 1, during the National Teacher of the Year announcement.

Born in Lisbon, Portugal, Carvalho immigrated to the United States at age 17.  Earlier this year, Carvalho was selected National Superintendent of the Year by AASA, The School Superintendent’s Association.

He is a nationally recognized expert on school reform and finance who successfully transformed the district’s business operations and financial systems with the implementation of a streamlined Strategic Framework, aligning resources to classroom priorities resulting in dramatic increases in reserves, bond ratings and student achievement.

In just over a year, Miami-Dade County Public Schools has been honored with an unprecedented trifecta of national awards, including The Broad Prize for Education, AP District of the Year, and most recently AASA’s National Superintendent of the Year. Carvalho, who was born in Portugal, represented Florida in the national competition.

Now in its 28th year, the National Superintendent of the Year program celebrates the contributions and leadership of public school superintendents. Carvalho was measured against the following criteria: Leadership for learning – creativity in successfully meeting the needs of students in the school system; Communication – strength in both personal and organizational communication; Professionalism – constant improvement of administrative knowledge and skills, while providing professional development opportunities and motivation to others on the education team; Community involvement – active participation in local community activities and an understanding of regional, national and international issues.

Alberto Carvalho  became Superintendent of the nation’s fourth largest school system in September 2008. He is a nationally recognized expert on school reform and finance who successfully transformed his district’s business operations and financial systems with the implementation of a streamlined Strategic Framework focused on a singular goal of student achievement. Miami-Dade County Public Schools is now widely considered the nation’s highest-performing urban school system, and was named as the 2014 College Board Advanced Placement Equity and Excellence District of the Year as well as the 2012 winner of the Broad Prize for Urban Education.  On November 6, 2012, following four years of extraordinary District performance, Miami-Dade County voters confirmed their faith in their public schools and their Superintendent by passing a $1.2 Billion Bond Referendum for school construction.

He has been selected as Florida’s 2014 Superintendent of the Year as well as the 2014 National Superintendent of the Year.  In addition, he has been named by Scholastic Administrator as one of “The Fantastic Five” educators making a difference in America. A versatile leader, Carvalho is also the self-appointed principal of two award-winning schools—the Primary Learning Center and the iPrep Academy, and has served as President of the Association of Latino Administrators and Superintendents.  He has received the Hispanic Heritage Education Award and the 2013 National Child Labor Committee Ron H. Brown Award; he has been acknowledged as Visionary Leader of the Year by the Greater Miami Chamber of Commerce and South Florida’s Ultimate CEO; and he has been recognized for Leadership in Government by the Miami Chapter of the American Institute of Architects. He is a member of Florida’s Council of 100 and the Honorable Order of Kentucky Colonels.  He has been honored by the President of Portugal with the “Ordem de Mérito Civil” and by Mexico with the “Othli Award,” the highest award for a civilian living outside of Mexico. Mr. Carvalho has been featured on CNN, NBC, and ABC and in publications such as The New York Times, District Administration Magazine, and The Christian Science Monitor.

The White House recognition may be streamed live at www.whitehouse.gov, beginning at 2:30 p.m.