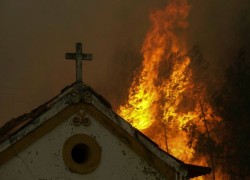 Portugal declared a state of emergency in areas north of Lisbon, after at least 37 people have died victims of wildfires spreading over the weekend.

Seven people feared dead were still missing on Tuesday. The fires injured 56 people, 16 of them seriously.

On the weekend, about 524 fast moving fires were reported in the central and the northern regions of the country where more than 5,300 firefighters and about 1,600 vehicles were working to extinguish the blazes.

Areas most affected by the wildfires (Three days ago)

It was reported that almost all major wildfires were out by Tuesday morning, but 2,700 firefighters were deployed to prevent re-ignitions in the country’s blazing forests. Rain has helped to quench many fires late on Monday, government authorities have said.

On Tuesday, Portugal declared three days of national mourning for the victims of this tragedy coming four months after forest fires killed 64 victims in June.

The fire that began on June 17, in Pedrógão Grande,  injured more than 200 and was only extinguished a week later.

Authorities have blamed arsonists for the spreading of fires, while opposition parties and public outrage have accused the government of “lack of preparedness” for the occurrences.

This year, nearly 216,000 hectares (530,000 acres) had been consumed by wildfires across the country, between January and September, according to estimates from the country’s forest service.

This summer season, forests in Portugal have been burning due an unusually dry and warm weather.  Windy conditions, high temperatures and a prolonged severe drought are mostly to blame for such weather conditions hostile to efforts to bringing the fires under control. This weekend, dry conditions and the winds fanned from Hurricane Ophelia may have aggravated the fast spreading of fires.