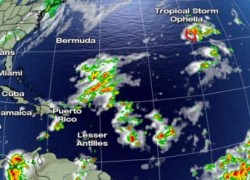 Weather system Ophelia, a Category 1 storm, is slowly moving through the Atlantic Ocean toward the Azores where it is expected to reach hurricane strength this weekend. The storm is also expected to hit the United Kingdom next week as a powerful post-tropical system.

On Thursday morning, the National Hurricane Center said Ophelia was 725 miles southwest of the Azores and moving northeastward travelling at 3mph with maximum sustained winds close to 85mph.  The system is expected to continue this motion over the next couple of days before turning north to northeast while increasing in speed. 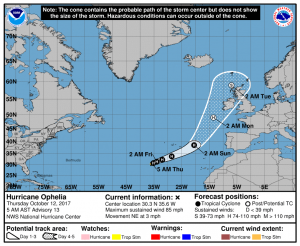 “Ophelia has become better organized during the past several hours, with convective banding now wrapping almost all of the way around the center. These conditions favor strengthening and the NHC forecast now calls for Ophelia to become a hurricane in about 24 hours,” the NHC said later Thursday.

The Civil Protection of the Azores, the Portuguese Institute of the Sea and Atmosphere (IPMA) and other civil agents on the archipelago are monitoring the evolution of Ophelia.

Ophelia is the 10th hurricane strength storm in the Atlantic in the 2017 season, following Harvey, Irma, Maria and Nate, which caused catastrophic weather conditions across the United States and the Caribbean between August and September.