Opinion: Where does Portugal figure in all this?
– By Len Port 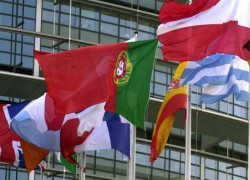 A weekend is a long time in politics. It certainly was last weekend, especially for the future of the European Union.

Immediately before the election in Britain, it was no more than a possibility that the UK would hold a referendum on its membership of the EU. After the votes had been counted, possibility had shot up to certainty.

Amid the VE Day celebrations, the Sunday Times came out with the bizarre front-page headline: “Cameron launches blitz on Europe.”

The British prime minister has pledged to hold an ‘in/out’ referendum before the end of 2017. The result of the referendum will depend heavily on what Cameron can do between now and then to make the EU less “big, bossy and bureaucratic.”

His supposed arch-enemy in the EU, Jean-Claude Junckers, president of the European Commission, lightened things up by tweeting: “Congratulations, @David_Cameron for a resounding victory. I am ready to work with you to strike a fair deal for the UK.”

Still, by Monday the leader of Britain’s new Conservative government was reportedly drawing up plans to bring the referendum forward by a year to 2016 in order to avoid clashing with the French and German elections in 2017.

Meanwhile, last Friday the Greek prime minister, Alexis Tsipras, said he was confident his country’s struggle to repay its debts would “soon have a happy ending.”

On Monday Greece managed to repay a paltry €750 million in IMF loans just hours before they were due, but officials in Brussels wearily reiterated that major issues remain unresolved, distrust still abounds, and time is running out to prevent the Greek debt crisis exploding.

Where does Portugal figure in all this? Well, as the IMF so politely put it last Friday, “Portugal’s medium-term interests are still clouded by legacy problems.”

The prospects of both a Greekexit and a Britexit from the EU are increasing all the time but a Portugalexit is not on the cards, not yet anyway.

As one of the EU’s most vulnerable member states after Greece, Portugal is keeping its head down and trying to play by the rules. And yet Prime Minister Pedro Passos Coelho made an unusually bold statement on Europe at a conference in Italy on Friday. He proposed the creation of a European Monetary Fund to take over any future Eurozone bailout responsibilities from the Washington-based IMF, and thus provide a purely European solution to such problems.EMF,

Neither of the main parties in Portugal has welcomed the IMF’s latest urgings for more austerity in the shape of further cuts to government spending. With a general election coming this September or October, how the Social Democratic Party (PSD) and the Socialist Party (PS) intend to handle the Troika and resolve the economic crisis will be uppermost in the minds of Portuguese voters.

Passos Coelho’s ruling center-right coalition has steadfastly kept to its bailout pledges, and while the main opposition Socialists are against austerity they are not proposing a cop out on repayment commitments.

The Socialists have interpreted this year’s Greek far-left political transformation as “a sign of change in the orientation of Europe of how austerity policies have reached a limit and of the necessity of new policies.”

Both the main political parties want this country to remain a member of the European Union, but the union may be on its way to taking on a very different complexion.