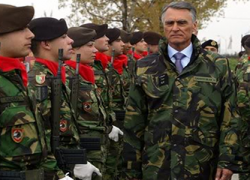 As Europe celebrates VE Day, the 70th anniversary of the formal end of World War II between the Allies and Nazi Germany on 8th May, Europe once again finds itself in a perilous situation.

Although officially a neutral non-participant in World War II, four years after its end Portugal became a founding member of the North Atlantic Treaty Organization (NATO) of which it remains a valued partner.

During a recent visit to Lisbon, the chief of NATO, Jens Stoltenberg noted, “we are facing a dramatically changed security environment in Europe.” He was referring to new and serious threats from both north and south.

Stoltenberg, the former prime minister of Norway, praised Portugal for its contribution to NATO’s presence in north-eastern Europe in the face of hostility from Putin’s Russia.

He welcomed Portugal sending ground troops to Lithuania and F-16 jets for joint patrols in the Baltic airspace bordering Russia.

Portugal was involved last month in the first military drills of NATO’s new Spearhead Force, a very high readiness joint task force that can be deployed 48 hours after receiving an order to move.

This autumn, Portugal will be one of the countries hosting Trident Juncture, NATO’s biggest exercise since the end of the Cold War. The five-week exercise will involve more than 25,000 troops at various locations in Portugal, Spain and Italy.

The aim will be to train and test the NATO Response Force, a high readiness and technologically advanced force comprising of land, air, maritime and special forces units capable of being deployed quickly on operations wherever needed.

None of this will be lost on ISIS operating in Syria and Iraq. While security forces are alert to the possibility of isolated jihadist terror attacks inside Portugal as in other countries in Europe, the expressed intention of Islamic extremists to renew the centuries-old Umayyad Caliphate in southern Portugal and Spain remains nothing more than a fanatical pipe dream.

Meanwhile, ISIS and all other potentially hostile forces know that an attack on any one member of NATO would be treated as an attack on all.

Relatively modest in EU terms, Portugal’s defense budget is 1.1% of GDP, the same as Germany and Italy but lower than France and Britain. The number of military men and women on active duty totals 43,000, backed by a reserve force of 212,000 and 47,000 paramilitary personnel. It works out at a fairly high total per 1,000-capita population.

The Portuguese military have seen action over the past few years in combating piracy off Somalia and the Horn of Africa, and contributing to UN peacekeeping missions. Most recently they have been called upon to help with the EU’s “comprehensive response” to the North African migrant crisis.

There is no simple solution to this ongoing migration problem, but EU leaders have agreed to triple funding to help rescue operations and stop people-smuggling boats.

Participation in all of this is not easy for a small country immersed in an EU-wide economic crisis that could get worse before it gets better, but Portugal is playing its part in keeping Europe peaceful.
____________