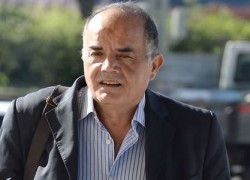 The McCanns partially won their libel action against the author and former lead detective Gonçalo Amaral, but the matter is far from over.

Amaral intends to appeal. In his first comment on the verdict he said today: “I find that the court’s decision is unfair and questions my right and every Portuguese citizen’s right to freedom of expression and of opinion. For that reason, I do not resign myself to the decision and I will appeal it until the very last judicial instance.”

Apart from Amaral’s assertion on the “unfairness” of the court’s decision, there were two remarkable features about the verdict and the way in which it was announced that got little or no mention in the mainstream media coverage.

The first unusual aspect was the huge sum awarded. It may be normal in the UK, but not here. Amaral was ordered to pay the parents of Madeleine McCann half a million euros in damages, plus interest, currently calculated at €106,000 and rising.

The McCanns successfully claimed that Amaral’s book, Maddie, the Truth of the Lie, caused them great personal distress. The judge did not agree, however, that the book had hindered the search for Madeleine or had caused damages to the twins.

Should Amaral on appeal get the verdict overturned, or the compensation figure greatly reduced, the McCanns may lodge a counter appeal. The deadline for appeals is 40 days. The legal battle that has been going on for more than five years looks like continuing for some time yet.

A defiant Amaral supporter noted that, “a decision from a Portuguese court can only be enforced after all appeals are exhausted. No money will change hands until a final decision is reached by the very last appeals court.” With this in mind, other well-wishers are being urged to make donations to a Gonçalo Amaral defense fund.

The second oddity was the way in which the announcement of the verdict was handled. The judge’s ruling was not read out in court. It was contained in a 52-page report, which was received by the McCann’s Lisbon lawyer Isabel Duarte who swiftly passed it on to media organizations in Portugal and abroad.

Soon after the news appeared on media websites, Kate and Gerry McCann said they were “delighted” with the outcome.

In a statement issued by their spokesman Clarence Mitchell, they said the case had never been about money. “It was entirely focused on the effect of the libels on our other children and the damage that was done to the search for Madeleine.”

When contacted by journalists the same day, Gonçalo Amaral chose not to comment because neither he nor his lawyer, Miguel Cruz Rodrigues, had received a copy of the ruling. They only received it the following day, by which time to many in the mainstream media it was old news.
____________