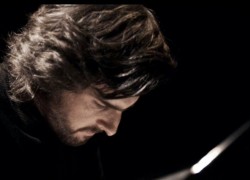 Portuguese jazz pianist and composer Bernardo Sassetti, 41, died Thursday in an apparent accident while hiking in Guincho, near Lisbon. He was allegedly shooting pictures when he took the fatal fall.

Sassetti, considered to be one of the most talented jazz musicians of his generation, was born in Lisbon where he learned to play the guitar and piano at the age of nine. He started his musical career in 1987 and in 1990 settled in London where he recorded three albums with the Guy Barker’s Quintet.

He composed countless master pieces which he performed solo or as a duet with Mário Laginha, another distinguished Portuguese composer. Occasionally both composers formed a trio with composer Pedro Burmester also Portuguese.

He had composed for the screen and acted in films, namely in The Talented Mr. Ripley by Anthony Minghella. He was married to Portuguese actress Beatriz Batarda. The couple had two daughters. He was the great-grandson of Sidónio Pais (1872-1918), president of the First Portuguese Republic. Read more >>