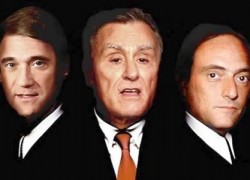 Portugal’s head of state has given the green light to Pedro Passos Coelho and his center-right “Forward Portugal” (Portugal à Frente) coalition to follow up on their first term in office and form a new government. But that doesn’t mean the inconclusive outcome of the general election is all sorted. Far from it.

President Aníbal Cavaco Silva’s decision to deny an unprecedented left-wing alliance the opportunity to govern has gone down well in Brussels and across conservative Europe, but it has caused a commotion at home.

The October 4 election produced no clear winner and this presented the largely ceremonial head of state with stark options. Although a former Social Democrat leader himself, Cavaco Silva was required by the constitution to fairly judge which group was best positioned to lead the country.

After consulting with all the political parties and in line with tradition, on Thursday evening the president nominated the group with the most electoral votes. He gave them ten days to present a four-year program for approval by parliament.

Passos Coelho hopes to be able to count on support from any center-left Socialists (PS) unhappy about the notion of an alliance with the radical Far Left (Bloco de Esquerda) and the hard-line Communist Party (PCP).

Should Passos Coelho fail to obtain a parliamentary vote of confidence for his program for the next four years, the president will then be expected to ask the broad left to try to form a government.

Passos Coelho has told the president of the steps he would take to continue sound pro-European governance by the PaF coalition despite failing to get an absolute majority on October 4.

Catarina Martins, spokesperson for the anti-establishment Left Block (BE), which has much in common with Greece’s “Syriza” and Spain’s “Podemos”, has said the BE will have the PCP’s support in tabling a motion rejecting the center-right confidence vote in parliament in the days ahead.

It is thought the Socialists may close ranks and do the same, although more moderate members of the PS are said to be increasingly uneasy about “the self-defeating and reckless” direction in which their leader may be taking them.

Socialist leader António Costa, whose party came second in the election, decided against striking any deal with the incumbent center-right, but managed to garner support from the Left Bloc and the Communists who finished third and fourth in the election.

Because of historic feuding, it seemed improbably before and even immediately after the vote counting that the country could end up with a triple left-wing alliance. But it has become a possibility.

The prospect of a sudden shift from a government that co-operated closely with international lenders, to one with anti-austerity and anti-EU leanings, sparked concern among conservative governments and fiscal markets in the Eurozone.

During the immediate post-election period this month, Costa, whose personal position seemed in doubt after the disappointing PS election result, reasoned that the center-right option would not be viable and would simply “prolong the uncertainty” in the country. He has now criticized the president for creating a “useless political crisis.”

The Left Bloc’s Catarina Martins said another center-right government would be “a waste of time” as it could not expect to serve for long. She has chastised the president for “creating instability” and acting like “a cult leader.”

Jerónimo de Sousa, leader of the Communists, maintained that a majority left-wing government was feasible though it had long been spurned by many Socialists. He criticized Cavaco Silva for his “confrontational stance and disregard for the constitution.”

Paulo Portas, the incumbent deputy prime minister and leader of the rightist CDS-People’s Party, said it was “absolutely extraordinary that a political leader fighting for his survival” (Costa) could even consider overriding “the vote of the people,” albeit it a minority vote.

Amid the domestic slanging, EU officials have threatened to take action against Portugal for not presenting its draft 2016 budget by the 15 October deadline. Portugal is still running one of the highest budget deficits in the Eurozone.

Thursday’s announcement by President Cavaco Silva did not banish international fears that further weeks of uncertainty could harm Portugal’s economic recovery more than a year after it exited the strict terms of its €78bn international bailout.

On the same day as President Cavaco Silva’s new government announcement, Angela Merkel, the German chancellor, expressed hope that Passos Coelho would be successful, but also spoke of her concern that upcoming elections in Spain and Ireland could see a swing to anti-austerity forces.

“We face difficult situations in Ireland, Spain and Portugal,” she told a meeting of the center-right European People’s Party (PPP) in Madrid.

Even if Portugal’s center-right get a vote of confidence in parliament in the days ahead, the new government will struggle to get through major legislative issues and is likely to have a limited life span.

No further general election can be held before May or June of next year. There will, however, be a presidential election when Cavaco Silva steps down in January. The future president’s first task may be to help clear up a political mess.