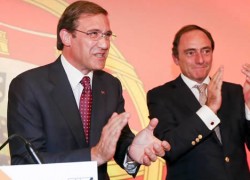 As anticipated, there was no outright winner in this election. The center-right coalition led by Prime Minister Pedro Passos Coelho won the most votes, about 38%, but it lost its majority in parliament and has little prospect of serving a full term.

The center-left polled just over 32% of the votes, less than expected, which left António Costa with another fight on his hands: to carry on as leader of the opposition Socialist Party amid calls for his resignation.

The anti-austerity Left Bloc (Bloco de Esquerda) achieved their best result ever with more than 10% of the votes. The Communist Party dipped into fourth position with just over 8%.

In the Azores archipelago the Socialist Party (PS) won the general election obtaining 40.37% of the vote while the Social Democrats (PSD) won 36.06 % of the vote, remained the second political force in the region.

In the Madeira archipelago, the Social Democrats (PSD) won 37.8% of the vote while the Socialist Party (PS) won 24%, remaining the second political force in the region.

The turnout was a record low: 43% of eligible voters stayed away, probably because they don’t like any of the political parties or felt their vote would not make much difference to the way the country is being run.

An outright majority in the 230-seat parliament would have required 44% of the vote. As it was, the coalition has so far come away with just 104 seats — 12 short. Seventy-six of the 230 seats in the new parliament will be taken up by women.

Four seats are still undecided as final results of voters living abroad are awaited. While emigrants have the right to vote, most don’t bother. In 2011, non-voters abroad totaled 83%.

The half a million Portuguese who have left the country since 2011 are expected to add to the overall abstention rate.

“If we stay on the path we’ve been following, we won’t need any more bailouts,” was one of Passos Coelho’s campaign messages.

Although his victory was a hollow one, at least he has the distinction of being the first prime minister to be re-elected among the five Eurozone states that received a bank bailout.

The 2011–2015 coalition government’s austerity program was hugely unpopular, but it appears to have worked, at least to the liking of Brussels. The coalition’s electioneering strong point was that having exited its bailout program successfully in 2014, Portugal’s economy looks like it is back on its feet, showing some of the best growth rates in the Eurozone.

Tough times lie ahead but the economy is expected to grow 1.6 percent in 2015 and 1.8 percent next year, according to the latest forecasts from the European Commission.

The Socialists failed to capitalize on their promise to moderate the government’s austerity measures. António Costa said they would boost households’ disposable income while going along with fiscal discipline and supporting the EU policies so adamantly opposed by the far-left.

So, in essence, the 57% of voters who bothered to turn out have just put into power a weaker version of the unpopular government they had before. By a slim margin, voters have decided to stick with the devil they know.