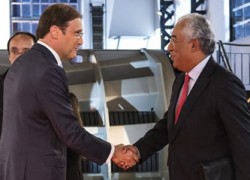 More than two weeks after the general election, Portugal will still be in the awkward position of not knowing who is to form the next government.

How much easier it would have been if a group of extraterrestrials had landed last week. They would have provided a handy solution to the conundrum created by voters on 4th October.

Portugal’s democratic history shows that minority governments can’t operate efficiently and don’t last long. So, having received the most votes but failing to win a majority, the center-right (PaF) coalition under caretaker prime minister Pedro Passos Coelho could do with some backing from the opposition center-left Socialists led by António Costa.

Shortly after the election, Costa said it would take “a Martian invasion” to convince him to join an alliance with the center-right. He stopped short, however, of ruling out supporting a minority government on major legislative issues on which they could find common ground.

Negotiations between Passos Coelho and Costa on how they might compromise have so far got nowhere.

The Socialists may still hold the key to some sort of workable power-sharing arrangement, but they have a dilemma. They are pro-EU and have promised to honor this country’s budget commitments, but they oppose and want to lessen the harshness of the austerity measures imposed by the last government.

Before the election, a coalition between the Socialists and the far left – comprising the Left Bloc and the Communist Party – seemed almost unthinkable because of fundamental policy differences.

Surprise, surprise, it emerged that the center and far left were seriously considering getting together, if only to keep the center-right out.

Although remote, there is a possibility of joining together the center-left with the far-left…

The Socialists, unlike the far left, are opposed to dropping austerity or exiting the Eurozone. But if the center and far left were to marshal their differences, they could muster a majority in parliament.

Opinion polls indicate that most Portuguese do not believe the three left-wing parties could form the country’s next government, but it remains a possibility.

Bloomberg Business reported that the election had been a victory for Passos Coelho and had been hailed by pundits as “a triumph for austerity and perseverance over Greek-style upheaval.”

The Financial Times said “Mr. Passos Coelho’s re-election cannot be described as a ‘victory for austerity’. At most, it reflects a grudging acceptance”.

The American online weekly Policy Digest claimed that, “along with last month’s Greek election, it was two in a row for the European Left.” Portugal’s ruling coalition lost its majority “in spite of a well-financed scare campaign, and a not very subtle effort by the European Union to load the dice” in the election.

Whichever way you look at it, political instability or any lack of fiscal discipline can only make Portugal’s fragile economy all the more vulnerable. Investors are already jittery.

President Aníbal Cavaco Silva will hold separate meetings with the leaders of the main parties on Tuesday and Wednesday, October 20 and 21. Only then will the president be able to decide who to ask to form the next government.

It’s probably all a bit farcical to the record number of voters who abstained on 4th October because they don’t hold politicians of any party in high regard. Some of the abstainers might welcome a sudden influx of sensible Martians.