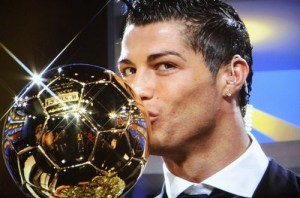 A photo taken on a TV screen shows Manchester United Portuguese winger Cristiano Ronaldo kissing his trophy on a French TV set after he won the European footballer of the year award, the “Ballon d’Or” (Golden ball), on December 7, 2008 in Boulogne-Billancourt, outside Paris. Ronaldo beat Barcelona’s Lionel Messi and Liverpool striker Fernando Torres to the honour on the back of a phenomenal 2007-08 season in which he scored 42 goals for his Premier League and Champions League-winning club. Ronaldo becomes the first United player to win the award since the late George Best in 1968. AFP PHOTO FRANCK FIFE (Photo credit should read FRANCK FIFE/AFP/Getty Images)