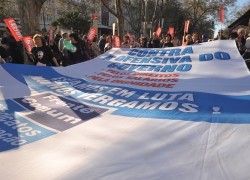 Thousands of Portuguese unionists protested yesterday downtown Lisbon to end austerity measures,  demand jobs and better pay. The protest was headed by trade unionists affiliated to the General Confederation of Portuguese Workers, which claims around 600,000 members.

Portugal’s unemployment rate is 11.2 percent as the country avoids the pressure for a bailout due to high borrowing costs and the Bank of Portugal foresees a double-dip recession.