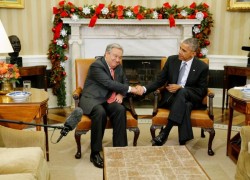 Speaking to the press, President Obama said Guterres had an extraordinary reputation and that he was confident that the next Secretary-General of the international organization would be an effective leader.

“At a time when those challenges are mounting, having an effective partner in the United Nations Secretary- General will be critically important,” President Obama said.

Guterres stated that he is ready and totally committed to working closely with the United States in the present administration and with the President-elect Donald Trump administration.

On October 6, the 193-member General Assembly nominated António Guterres “by acclamation” for the five-year term post of the international organization.