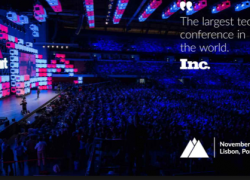 The World Web Summit, the largest technology convention in the world and Europe’s largest tech event, will be held again in Lisbon, Portugal, starting November 5 through November 8. The summit will gather 70,000 delegates and 15,000 companies from 160 countries.

Established in 2009, and originally called the ‘Dublin Web Summit’, the World Web Summit was held annually in Ireland, before moving to Lisbon in 2016 where it will remain for another 10 years.
The decision to extend the agreement to keep the event in Lisbon was revealed by Web Summit Chief Executive Officer Paddy Cosgrave and Portuguese Prime Minister António Costa in early October after a competitive process involving over 20 European cities.

Under the agreement, Portugal’s government will pay the Web Summit organizers €11 million a year, anticipating that the number of participants will increase exponentially. The agreement obliges Web Summit to pay Portugal €3 billion ($3.5 billion) if it were to decide to leave the country before the end of 10 years.

The Portuguese government estimates that each event itself will generate €300 million ($347 million) for Lisbon in hotel and other revenue while promoting Portugal and Portuguese companies on the global stage, particularly the technology startups.

“This 10 year agreement with Web Summit will decisively make Lisbon a key capital for innovation, entrepreneurship and talent,” said Lisbon Mayor Fernando Medina. “I am confident the next few years will bring a sharp increase in IT investment and employment in Lisbon. We are thrilled to continue to write this story together with Web Summit.”

The CEOs and founders of the world’s biggest companies, the most promising new startups, influential investors and leading journalists will attend the summit co-organized with Turismo de Lisboa, Turismo de Portugal and AICEP. 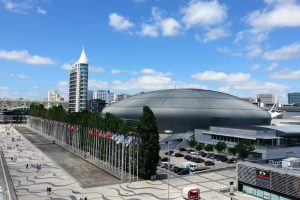 The event which will be covered worldwide by over 2,600 journalists from over 150 world’s leading publications reaching a projected global audience of over 3 billion, will take place at the Altice Arena and Feira Internacional de Lisboa, the pavilion complex built for Lisbon’s 1998 World Fair. The Portuguese government has agreed to double the size of the venue to allow the conference to continue its expansion. The goal is to have the construction done by 2019.

“We’re incredibly excited to be staying in Portugal,” said Web Summit CEO Paddy Cosgrave, in a statement. “Without a larger venue, this would not be possible. Even until a few months ago, we never believed it would be possible. The plans are incredible, and we’re very thankful to all those who have worked on them.”

Attendees range from Fortune 500 companies to smaller tech companies, and include a mix of CEOs and startup founders and a wide range of professionals from across the global technology industry and its related industries.

Lisbon has now climbed to fourth in a global list of the best places to start a new business, according to freelance marketplace PeoplePerHour’s Startup City Index. Yet currently unemployment nationally was still 12.5 percent last January and around 30 percent for people under the age of 25, while the European Union forecasts that Portugal won’t recover all the jobs lost during the economic crisis until at least 2025.