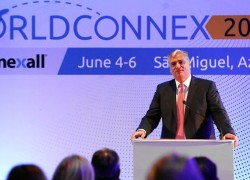 The President of the Government of the Azores, Vasco Cordeiro, highlighted the role of the Azores as a privileged meeting point between countries and continents offering the conditions to host more and larger private events on a global scale.

Reiterating that the Azores are a “gateway to Europe,” by hosting this type of events “they also are historically and geographically a meeting point between several countries and continents”,” said the President of the Government.

“One of the major challenges countries and governments around the world face in this area, concerns the importance of establishing the best possible link between the growing needs of health systems and how new technologies may respond to these needs,” he added.

President Cordeiro also highlighted the ties of GlobeStar Systems founder and CEO, David Tavares, to the Azores. “Despite having left early for other places, particularly Canada, he has never forgotten his island of São Miguel.”

The WorldConnex 2018 conference provides a unique collaborative environment for an exclusive audience of healthcare professionals from some of the world’s most prestigious, award-winning hospitals to discuss the future of healthcare.

The conference is dedicated to customer/end user presentations on such topics as patient flow and management, MobileConnex app, secure messaging, smart alarms, enterprise service bus platform, as well as updates on the latest upgrades and versions of Connexall.

WorldConnexall was founded in 1992 by Azores born David Tavares. The company is dedicated to Information and Communication Technology (ICT) specializing in healthcare, operating  in more than 1,000 hospitals and healthcare systems around the world with offices in Canada, the United States, Brazil, Hong Kong and Portugal.