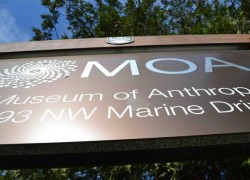 The Museum of Anthropology (MOA), located in Vancouver, Canada, is organizing the exhibit ‘Heaven, Hell & Somewhere In Between’ a display of a collection of 300 items of Portuguese folk and popular artwork. Beginning May 12, the exhibit will stay open to the public until October 12.

According to the organizers, the display is a “distinct and eclectic mix of urban graffiti and mural paintings combined with popular rural creations: puppets, figurines, carnival masks, ceramics, and more,” expressing Portuguese social, political and religious experiences in an effort to highlight underrepresented embodiments of Portuguese folk art in Canada.

For the second year running, MOA is also organizing a cultural tour to Portugal for two weeks in October, shortly before the exhibit closes. The aim of the trip is to fully engage with the art of the exhibition, meeting the artists and seeing their communities. The trip is led by MOA’s curator and director, Anthony Shelton, the exhibit organizer.

The exhibit will be on view in MOA’s Audain Gallery. The opening, scheduled for May 12, 7-9pm, features a Portuguese wine reception.

The Museum of Anthropology (MOA) at the University of British Columbia (UBC) campus in Vancouver, British Columbia, Canada, is renowned for its displays of world arts and cultures, in particular works by First Nations peoples of the Pacific Northwest Coast First Nations.