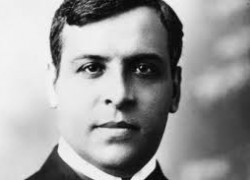 Aristides de Sousa Mendes, the Portuguese consul in France credited for having saved 30,000 lives during World War II, was honored Sunday — Holocaust Remembrance Day– at the Utah State Capitol Rodunda by members of the Jewish community

The Salt Lake Tribune reported that the ceremony included the lighting of six candles to commemorate the 6 million Jews murdered during World War II. The lighting was followed by a minute of silence.

Sousa Mendes was the Portuguese Consul in Bordeaux, saving an estimated 30,000 lives, the majority of them Jewish, when Paris fell to the advancing Nazi army in June of 1940 and Jewish and other refugees tried to escape for Spain and Portugal overnight.

He issued visas against the Portuguese government orders for which he was recalled and subjected to disciplinary action. A father of 14 children, he died destitute and in obscurity on April 3rd, 1954.

Aristides de Sousa Mendes was recently honored in Mineola (NY) and Newark, (NJ) on events co-sponsored by the Jewish and Portuguese American communities.

Sousa Mendes- A rigtheous among the Nations