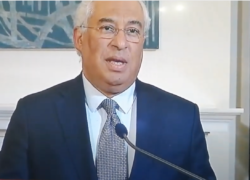 He tweeted on Saturday: “We look forward to working with the new USA Administration to reinforce transatlantic relations and cooperate on global issues, such as climate change, defense of democracy and international security.”

The defeat of President Trump will favor Portugal, which was among the countries in Europe that would lose the most under an extended Trump administration.

Washington has been pressuring Lisbon to ban Chinese telecoms giant Huawei from establishing a 5G network infrastructure in the country.

Reacting to Washington pressure, Foreign Minister Santos Silva reiterated recently that any bids from 5G Chinese operators “will be assessed in the light of strict Portuguese and EU regulations,” and that “Each country will make its own decisions about such matters.”

The ending of the Trump administration coincides with Portugal preparing to presiding over the European Council, starting in the first half of 2021, effective January 1 until June 30, 2021.

This is the fourth time Portugal has presided over the EU Council since it joined the European Economic Community, in 1986.

The incoming Portuguese presidency happens when the EU relationship with the US was deteriorating, dominated by the US-China competition and Russia interference in European affairs.

Currently, Portugal is looking forward to promoting its agenda of priorities leading to the European Council. For Foreign Minister Augusto Santos Silva, the priorities begin with dealing with the grim coronavirus pandemic which is crippling the economy of the European block.

Other priorities include the completion of Economic and Monetary Union, the UK-EU relationship following Brexit, the EU’s relationships with Africa and India, climate change, digital transition, social welfare and inequality. Other concerns relate to water scarcity and drought.