Portugal: China will not be excluded from doing business in the country – Washington 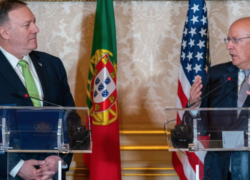 At a joined news conference with the Portuguese Foreign Minister, Secretary of State Pompeo, warned that Chinese government “won’t hesitate” to use Huawei as a tool to access sensitive data.

“We have tried for these past couple of years to make clear to our friends all around the world of the attendant risks,” the US Secretary of State said.

Foreign Minister Santos Silva reiterated that any bids from 5G Chinese operators “will be assessed in the light of strict Portuguese and EU regulations,” and that “Each country will make its own decisions about such matters.” He also said that all foreign investment is welcome, including from US companies.

It has been reported that wireless carrier ‘Altice Portugal’ has already partnered with Huawei which prepares to launch the service in Portugal in 2020. Chinese companies have already acquired significant assets in Portugal in many sectors such as energy, banking and insurance.

Other European countries have also been pressured by Washington to avoid partnering with Huawei under the suspicion that it may compromise cybersecurity by engaging in cyber-espionage with Beijing. The allegations have been denied by both Huawei and Beijing.

Secretary of State Mike Pompeo travelled to Lisbon last week to meet privately with Israeli Prime Minister Benjamin Netanyahu. The meeting revolved around the Iranian regime efforts to interfere in Syria and violations of the 2015 nuclear deal.

Prior to meeting Mike Pompeo, Benjamin Netanyahu had called for increased pressure on Iran, criticizing Europe for being soft on Tehran. In addition he said that he would discuss his proposal to annex the Jordan Valley, a strategic part of Palestine’s West Bank.

Palestinians seek all of the West Bank, captured by Israel in 1967, as part of their territory. Such a move would draw condemnation from the Palestinians and much of the world.

In Lisbon, Prime Minister  Netanyahu also met privately with Portuguese Prime Minister Antonio Costa to discuss ‘bilateral relations between Portugal and Israel’ and to thank him for taking a tough stance against anti-Semitism. A joint statement by the two heads of  state was not issued.

On Wednesday, December 3, Portugal became the 34th full member of the International Holocaust Remembrance Alliance (IHRA).  The IHRA was formed in 1998 to promote awareness of and education about the Holocaust.

The trip marks the first visit to Portugal of an Israeli prime minister since 2000, when Ehud Barak went to Lisbon to meet former US President Bill Clinton.

Israel’s attorney general last month indicted Netanyahu for fraud, breach of trust and accepting bribes in three separate cases. It is the first time in Israeli history that a sitting prime minister has been charged with a crime.