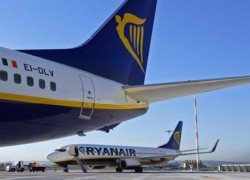 Ireland based low cost Ryanair airline has issued a statement on Thursday stating it “has not considered or approved any transatlantic project and does not intend to do so,” the BBC of London reported.

“Ryanair has abandoned plans to operate transatlantic flights, just days after it said its board had approved the measure,” said the BBC.

On Monday, “Ryanair had said its board approved a plan to operate budget flights to the US within five years. Ryanair first aired the plans in 2008,” the BBC reported.

Earlier in the week, a spokesperson told the BBC long-haul flights were “dependent on attaining viable long-haul aircraft and we estimate that’s four to five years away”.

It said it would like to offer low-cost flights between 12 to 14 European cities and the same number of US cities.

Last December, the Irish airline had announced plans to open a new route from Europe to Ponta Delgada, Azores, starting on April 2015, and that talks were underway with the Government of the Azores regarding flights to São Miguel and Terceira islands to include international transatlantic flights to North America.

Transatlantic flights between the United States and the Azores have been served exclusively by SATA Airlines, a state-owned company run by the Government of the Azores in partnership with state-owned TAP Air Portugal. Based in Ponta Delgada, São Miguel island, SATA Airlines connects the nine islands of the Azores with mainland Portugal, Europe and North America.