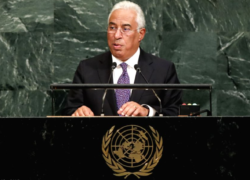 Prime Minister of Portugal, António Costa, is due to travel Monday to New York to speak at the 77th General Assembly of the United Nations, scheduled for September 22, returning to Lisbon afterwards, LUSA reported.

This year’s general debate among world leaders will be the first since the Russian Federation invaded Ukraine on February 24, starting a war that has been going on for nearly seven months.

On Thursday, PM António Costa, will meet with the UN secretary general, António Guterres, at the United Nations, a former Portuguese prime minister, unanimously elected in 2021, by acclamation, as the ninth Secretary-General of the United Nations, to a second five-year term, ending in 2026. He began his second term on January 1, 2022.

In New York, between Monday and Thursday, the day he will return to Lisbon, António Costa has planned bilateral meetings with the presidents of Ecuador, Guillermo Lasso, Argentina, Alberto Fernández, Senegal, Macky Sall, and Timor-Leste,José Ramos-Horta.

He is also expected to meet with the head of government of Andorra, Xavier Espot Zamora, and with the president of the 77th session of the UN General Assembly, the Hungarian Csaba Korosi.

On the sidelines of the UN General Assembly, the prime minister is also scheduled to meet with the president of global affairs at Google and legal director at Alphabet, Kent Walker, and with Portuguese officials from the United Nations and members of the Portuguese community.

On this trip to the United Nations, António Costa will be accompanied by the Minister of Foreign Affairs, João Gomes Cravinho, and by the Secretary of State for Foreign Affairs and Cooperation, Francisco André.

Before the general debate, the Prime Minister will participate on Monday in a summit on Education Transformation, organized by the UN Secretary General.

On Wednesday, he will be at a meeting of the leaders of the High-Level Panel for a Sustainable Ocean Economy and at the usual reception offered by the President of the United States of America, Joe Biden, to the participants in the UN General Assembly.

António Guterres was elected UN Secretary-General, for the first term, by the 193-member assembly, to succeed Ban Ki-moon, in October 2016. He served as prime minister of Portugal from 1995 to 2002 and was the UN High Commissioner for Refugees from June 2005 to December 2015.