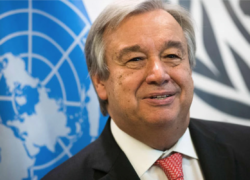 Portugal has officially nominating UN Secretary-General António Guterres as a candidate for a second five-year term.

The nomination came in a letter addressed to the President of the General Assembly,Volkan Bozkir, and to the Security Council, complying with selection process, which requires that the country of origin of the candidate must submit a letter of endorsement of the election.

“I am available to serve a second term as secretary-general of the United Nations, if that will be the will of member states,” Guterres said last month in a letter to Volkan Bozkir.

“Since assuming office, I have had the privilege of working towards the reform of the United Nations to meet the aspirations of member states, striving for the dignity and the well-being of people, while ensuring the sustainability of our planet for future generations,” Guterres wrote.

António Guterres, who took office on January 1, 2017, ends his current term on December 31, 2021. He was elected for the first term, by the 193-member assembly, to succeed Ban Ki-moon, in October 2016, that included 13 candidates, seven women and six men.

Arora Akankoha, 34, A UN Development Program employee, the only challenger for the post, has sent a letter to UN General Assembly President informing of her intention to compete for the position.

António Guterres has remarked that, “2020 brought us tragedy and peril and must be the year to change gear and put the world on track. We need to move from death to health, from disaster to reconstruction, from despair to hope, from business as usual to transformation.”

He also stressed the importance of an inclusive recovery from the coronavirus pandemic, and called for renewed focus on the fight against climate change, inequality, and strengthening human rights.

António de Oliveira Guterres, 71 ,  is the ninth secretary-general of the United Nations. A career politician he also served as president of the European Council (2000) and president of the Socialist International (1999-2005). As UN High Commissioner, he headed one of the world’s largest humanitarian organizations with a budget over USD $6.8 billion (2015) and more than 9,000 staff, working in 123 countries, providing assistance to over 46 million displaced people worldwide. He is fluent in Portuguese, French and Spanish. The role of the Secretary-General is critical in promoting world peace and stability. His main job is to oversee world crises such as refugees, pandemics, human rights and climate change. He manages a staff of 44,000, not including 104,000 peacekeepers.