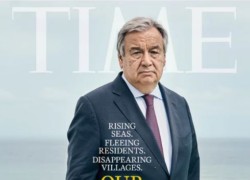 The United Nations  Secretary-General, António Guterres, is on the June 24 cover of Time Magazine with his message that climate change is one of the most problematic crisis in today’s world and that under his leadership the United Nations is bringing countries together to fight global warming.

“Climate change is for me, clearly an area where the U.N. has the obligation to assume global leadership,” he told Time Magazine. 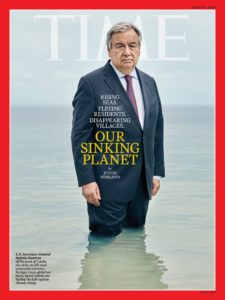 In a long interview with Justin Worland, António Guterres discussed his recent visit to the Pacific, where he met with world leaders who are facing the effects of climate change firsthand.

“The good thing about going to the Pacific is to see some of these people that we can rescue,” he said. “That gives us — an enormous, on one side moral obligation, but on the other enormous enthusiasm to do things.”

António de Oliveira Guterres, 71, is the ninth secretary-general of the United Nations. A career politician he also served as president of the European Council (2000) and president of the Socialist International (1999-2005). As UN High Commissioner, he headed one of the world’s largest humanitarian organizations with a budget over USD $6.8 billion (2015) and more than 9,000 staff, working in 123 countries, providing assistance to over 46 million displaced people worldwide. He is fluent in Portuguese, French and Spanish. The role of the Secretary-General is critical in promoting world peace and stability. His main job is to oversee world crises such as refugees, pandemics, human rights and climate change. He manages a staff of 44,000, not including 104,000 peacekeepers.