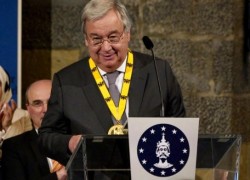 Secretary General of the United Nations, António  Guterres, was awarded the Charlemagne Prize 2019, one of the most prestigious European awards, at a ceremony held on Thursday in the German city of Aachen.

He is the first Portuguese winner of the prestigious Charlemagne Prize awarded annually, since 1950, to personalities who have contributed to the unity of the European continent.

Portuguese President Marcelo Rebelo de Sousa congratulated the UN Secretary General on Thursday, praising him as “an example and a demonstration of Portugal having the best.”

“Europe is going through a decisive historic moment, internally and in the world context,” President Rebelo de Sousa stated. Guterres is a symbol “of the importance of the European model of a pluralistic and solidarity society, committed to multilateral and values, principles and objectives of the future at the service of people,” he said.

António  Guterres was distinguished as “an outstanding defender of the European model of society, of pluralism, tolerance and dialogue, of open and solidarity societies, strengthening and consolidating multilateral cooperation,”  which earned him”international respect for his commitment to multilateralism, human rights and climate protection.”

“I wish Europe could stand up more decisively for the multilateral agenda. The United Nations need a strong and united Europe. For this to happen, Europe will need to come to grips with some serious challenges”, said the UN Secretary.

António de Oliveira Guterres, 71 ,  is the ninth secretary-general of the United Nations. A career politician he also served as president of the European Council (2000) and president of the Socialist International (1999-2005). As UN High Commissioner, he headed one of the world’s largest humanitarian organizations with a budget over USD $6.8 billion (2015) and more than 9,000 staff, working in 123 countries, providing assistance to over 46 million displaced people worldwide. He is fluent in Portuguese, French and Spanish.

The role of the Secretary-General is critical in promoting world peace and stability. His main job is to oversee world crises such as refugees, pandemics, human rights and climate change. He manages a staff of 44,000, not including 104,000 peacekeepers.