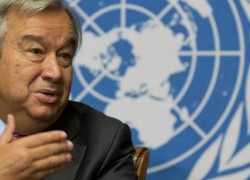 Guterres was nominated today “by acclamation” following a final straw poll by the Security Council, on Wednesday, recommending that the 193-member General Assembly appoint him for the five-year term post.

Guterres, who held the number-one spot in five previous informal votes, by the Security Council, was the decisive favorite.

“Today after our sixth straw poll we have a clear favorite and his name is Antonio Guterres,” announced Russia’s UN ambassador, Vitaly Churkin, this month’s Council president.

Last January, the Portuguese government had proposed António Guterres as its candidate to the post, based on his outstanding political career and international experience.

Guterres was prime minister of Portugal from 1995 to 2002 and served as United Nations High Commissioner for Refugees from 2005 to 2015. There were 13 candidates for the post, of which seven were women.

The editorial board of The New York Times had stated, “By any measure, António Guterres of Portugal is an excellent choice to replace Ban Ki-moon of South Korea as the next United Nations secretary general. He has experience, energy and diplomatic finesse, all of which he’ll need to lead the United Nations as it confronts regional wars, rising tensions between Russia and the West, China’s aggressive posture in Asia and the refugee crisis in the Middle East and Europe.”

Addressing the press, Guterres stressed that “prevention, prevention, prevention” was his priority and that “in no other place in the world we have a chance to address the root causes of human suffering.” And he added, “There is a need to confront and defeat populism, xenophobia, racism and violent extremism,” values he said he has defended.

The role of the Secretary-General is critical in promoting world peace and stability. He will manage a staff of 44,000, not including 104,000 peacekeepers. His main job is to oversee world crises such as refugees, pandemics, human rights and climate change.