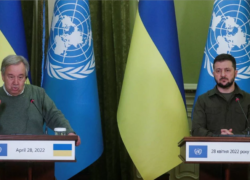 António Guterres, secretary-general of the United Nations and former prime minister of Portugal, seems to have learned much but achieved little during this visit this week to Moscow and Kiev.

He spent the hours before his afternoon meeting with the Ukraine prime minister seeing for himself evidence of the atrocities committed by Russian forces in towns on the outskirts of Kiev. Tightly surrounded by security guards, he spoke emotionally.

“When I see those destroyed buildings, I imagine my family in one of those homes now destroyed and black, I see my granddaughters running in panic,” said Guterres.

The UN secretary-general also visited the scene of the alleged Russian killings of hundreds of Ukrainian civilians. “Here you well know how important it is for a thorough investigation and accountability,” said Guterres in the town of Bucha near the capital.

He added that he fully supported the International Criminal Court and the need for investigations into war and humanitarian crimes. Russia has denied targeting civilians or civilian buildings.

In a joint news conference with President Volodymyr Zelenskyy on Thursday evening, Guterres admitted the UN Security Council had failed to prevent or end the war in Ukraine. He said this was “a source of great disappointment, frustration and anger.”

But Guterres reaffirmed his commitment to help save those barricaded in Mariupol, which Putin had agreed with him “”in principle.”