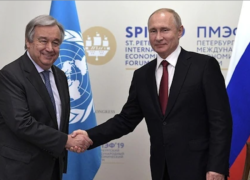 United Nations Secretary-General and former Portuguese Prime Minister António Guterres had a frank discussion with President Vladimir Putin in Moscow on Tuesday, but they were clearly poles apart on bringing about peace in Ukraine.

There was some success when Guterres told Putin the UN wanted to fully mobilise its human and logistical resources to open corridors to save lives in Ukraine, particularly in the besieged and almost totally devastated south-eastern city of Mariupol.

Putin agreed “in principle” to Guterres’ proposed coordination with the International Committee of the Red Cross to allow civilians to evacuate from the Mariupol steel plant where they have been holed up underground with Ukrainian troops and in dire need of food and medical supplies for weeks.

Putin insisted that Russian troops had offered safe passage for civilians, but that Ukrainian troops at the sprawling plant had been using the civilians as shields and not allowing them to leave.

Sitting alone at opposite ends of Putin’s famously long table, the UN chief appealed for a ceasefire in the war, which he insisted was caused by an invasion that was a flagrant violation of Ukraine’s territorial integrity. Putin would have none of it, though the conversation on various other aspects of the war went on for almost two hours.

Guterres said he was “extremely interested in finding ways in order to create the conditions for effective dialogue for a ceasefire as soon as possible.”

Hopes that this first face-to-face meeting since the invasion on February 24 would lead to a de-escalation of the conflict were largely quashed by harsh remarks from top officials in both Moscow and Kyve even before the talks began.

On the eve of the Moscow meeting, Russian Foreign Minister Sergey Lavrov warned that Ukraine risked escalating the conflict into a third world war and that NATO was engaged in a proxy war by supplying Kyve with weapons.  Lavrov added in a wide-ranging interview on Russian state television that the risk of nuclear conflict should not be underestimated.

Lavrov’s interview was aired just hours after the United States Secretary of State Anthony Blinken and Defence Secretary Lloyd Austin had personally visited Kyve and promised more American military assistance to Ukraine. After much reluctance, Germany too announced it will contribute quantities of heavy military weapons.

Referring to the UN chief’s visit to Kyve this Thursday, Ukraine’s President Volodymr Zelenskiy told reporters last Saturday: “It is simply wrong to go first to Russia and then to Ukraine. There is no justice and no logic in this order. The war is in Ukraine, there are no bodies in the streets of Moscow. It would be logical to go first to Ukraine, to see the people there, the consequences of the occupation.”

Guterres sought to overcome such criticism by emphasising his fervent wish to stop the war. The mass killings and the devastation of hospitals, schools and residential homes was having terrible consequences well beyond Ukraine’s borders, he said. It was causing deep concerns, including food and energy shortages, across the world, particularly in developing countries which were now not only struggling with increased hunger, energy and debt crises, but more social unrest as a result.  It is not just a war between Russia and Ukraine, in Guterres’ view.

Despite the determined if delayed positive intervention of the United Nations, a protracted war in Ukraine seems likely and world war three is still a possibility.