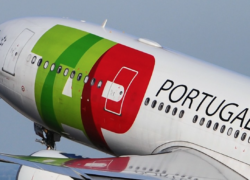 “It’s a rare privilege to be able to introduce a new route during such a hard time for the airline industry, and global travel in general,” said Carlos Paneiro, TAP Air Portugal’s vice president of sales for the Americas in a prepared announcement to the press.

“The Azores has always been incredibly popular with Portuguese Americans, especially in the summer so we’re thrilled to be able to offer a nonstop flight as well as our Lisbon stopover option,” it was stated.

According to the announcement, TAP is extending its “Book with Confidence” program to its U.S. customers who may be uncertain about making travel plans in the next few months. TAP is offering free re-booking for all new tickets booked from July 1st to July 31st for travel through Oct. 31st. Changes to travel plans must be made 21 days before departure to take advantage of the offer.

Currently, TAP is also offering Boston to Lisbon flights to US travelers able to fly either nonstop to and from the Azores or add stopover in Lisbon on either trip.

The North America Azores route is also served by SATA Azores Airlines which has resumed its international connections to North America starting July 1.

TAP has said it has plans to expand its gateways from North America to Portugal to include weekly flights from Miami and Toronto in the near future, twice a week between Toronto and Ponta Delgada. On July 30, a three-weekly flight between Montreal and Lisbon will be added.

On a particular note, the airline has developed and implemented the Clean & Safe initiative, aiming at establishing hygiene safety protocols to avoid in flight COVID’19 contamination, in line with the international health and sanitary safety guidelines of EASA, IATA, DGS and UCS.

Cancellations and/or rescheduling: Passengers holding tickets until September 30, 2020, are current as long as the ticket s were issued by May 15, Flights can be rescheduled free of charge and benefit from an additional discount of $25 to $100. Passengers also have the option to refund through a voucher. For more information on cancellations and refunds visit TAP Air Portugal.

NOTE TO US TRAVELERS: The Government of Portugal currently prohibits non-essential (tourist) travel to Portugal by U.S. citizens. However, some airlines continue to sell tickets for travel between the United States and Portugal. Please confirm your eligibility to enter Portugal with the airline and review the airline’s policy on refunds before purchasing tickets. Terms & Conditions may change on a daily basis. Before booking visit the US Embassy in Portugal.

Before the COVID’19 outbreak, TAP operated around 2,500 flights per week. North America was one of the company’s three main international markets. By the summer of 2020, in total, TAP projected to operate 82 weekly round trips from nine gateways in North America to Portugal.

Before the crisis, TAP operated from 7 airports in North America, 10 in Brazil, 1 in Venezuela, 16 in Africa, and approximately 70 in Europe. Visit TAP official website here.