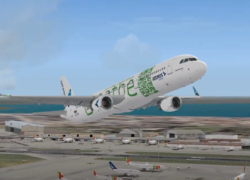 Daily flights between all the islands of the Azores will also resume, except for Corvo with connections on Monday, Wednesday, and Friday.

To date, the Azores are officially free of COVID’19. Currently,  the Azores have no record of COVID’19 infections, two and a half months after the first confirmed case in the Region.

To prevent the spread of the COVID’19 virus, all incoming passengers from abroad will be required to comply with containment measures.

“The resumption of international connections will be conditioned to the lifting of restrictions on the entry of foreign citizens in Portugal and in the different countries, as well as the evolution of the COVID’19 pandemic in the countries of origin,” SATA warn in a statement.

Although passengers from abroad are no longer subject to a mandatory quarantine, they are required to provide proof of a negative COVID’19 test taken 72 hours prior to arrival.

This is applicable to all travelers, whether they are visitors, residents or citizens.

In the case of a traveler who does not arrive with proof of a negative test, he or she will be required to take a test and await the results in precautionary quarantine in a hotel.

The results are expected to take no more than 48 hours.  Travelers who wish to remain in the Azores for more than 7 or 14 days, will be required to test again on the 5th and 13th day of permanence.

Other COVID’19 contention measures and restrictions may apply depending on the conditions and the evolution of the COVID’19-19 pandemic in the countries of origin.

Refusal to comply with screenings and questionnaires, will prevent the non-compliant passenger from disembarking.

In Madeira, incoming passengers must quarantine for 14 days upon arrival until July 1, 2020, when visitors will only need to provide proof of testing negative for the virus within 72 hours before arrival.

TAP has plans to expand its gateways to Portugal to include weekly flights from Boston, Miami and Toronto in the near future.

Passengers visiting mainland Portugal, will not be required to quarantine, but will have temperature taken by walk-through camera systems. Once in the country, social distancing measures are in effect. Masks are recommended at all times, and required while riding public transportation, gathering outdoors, and inside most attractions.

Portugal, including the Azores and Madeira, is a party to the Schengen Agreement. This means that U.S. citizens may enter Portugal for up to 90 days for tourist or business purposes without a visa. Passports should be valid for at least six months. Visitors need to proof of sufficient funds to self-support during the stay and a return airline ticket.

The Azores (population 250,000) is a region of Portugal composed of nine islands. The archipelago, discovered by Portuguese explorers in the 15th century, became an Autonomous Region of Portugal in 1976. The government of the Autonomous Region of the Azores includes the Legislative Assembly, composed of 57 elected deputies, elected by universal suffrage for a four-year term; the Regional Government and Presidency, with parliamentary legitimacy, composed of a President, a Vice-President and seven Regional Secretaries responsible for the Regional Government executive operations. The Autonomous Region of the Azores is represented in the Council of Ministers of the Central Government by a representative appointed by the President of Portugal. According to the latest US census over 1.3 million individuals of Portuguese descent live in the United States, the majority with roots in the Azores.