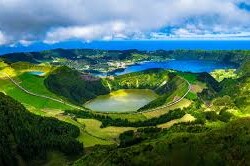 The Azores were listed  “European Best Destination,” in the context of “Coronavirus Safest Destination,” among the safest travel destinations in Europe in 2020, the Government of the Azores confirmed Friday in a press release.

The distinction is based on health security in the tourism sector and its related activities, the low number of COVID’19 cases, and the quality of local health services.

To date, the Azores are officially free of COVID’19. Currently, the Azores have no record of COVID’19 infections, two and a half months after the first confirmed case in the Region.

The Portuguese regions Madeira,  Alentejo and Algarve were also listed as “Coronavirus Safest Destinations” to visit, with Portugal being the country with most mentions.

“Taking into account the new normality that we live in, being considered one of the safest destinations in Europe in 2020 is a source of pride in the work done so far,” said Marta Guerreiro, the Regional Secretary for Energy, Environment and Tourism.

For the Government of the Azores, “The distinction is the affirmation that the measures implemented and the efforts of all Azoreans in complying with them are having very positive results.”

Based on this international recognition, Forbes Magazine has featured the Azores in its list of  safe destinations to visit in the time of COVID’19.

The Azores have also been awarded as European Best Destination in the categories of  “The Most Beautiful Landscape in Europe” and “The Best Destinations for Dolphin and Whale Watching.”

“European Safest Destinations 2020″ is a list prepared by European Best Destinations, identifying tourism destinations least affected by the COVID’19 pandemic (with up to 600 cases) and better prepared to reopen for travelers.

Portugal is the only country with four destinations included in “European Safest Destinations 2020,” followed by Croatia with three destinations.

The Azores (population 250,000) is a region of Portugal composed of nine islands. The archipelago, discovered by Portuguese explorers in the 15th century, became an Autonomous Region of Portugal in 1976. The government of the Autonomous Region of the Azores includes the Legislative Assembly, composed of 57 elected deputies, elected by universal suffrage for a four-year term; the Regional Government and Presidency, with parliamentary legitimacy, composed of a President, a Vice-President and seven Regional Secretaries responsible for the Regional Government executive operations. The Autonomous Region of the Azores is represented in the Council of Ministers of the Central Government by a representative appointed by the President of Portugal. According to the latest US census over 1.3 million individuals of Portuguese descent live in the United States, the majority with roots in the Azores.