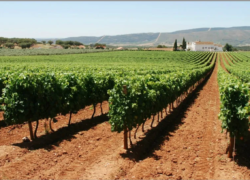 A promotional tourism roadshow is taking place in North America this week, from May 9th to 13th under the motto, “The North is the birthplace of Portugal, while the Alentejo is its heart.”

The initiative, co-sponsored by Turismo de Portugal, Turismo do Porto e Norte de Portugal, Turismo do Alentejo and Comissão de Coordenação e Desenvolvimento Regional do Norte (CCDR-N), will be present in five cities in the United States and Canada to include Washington, Chicago, Boston, Montreal and Toronto, cities that have at least one daily flight to Portugal and that have interest in rural and inland tourism.

In Washington, DC, the work session will be opened by the Ambassador, Francisco António Duarte Lopes, and in the city of Toronto by the Consul General, José Manuel Carneiro Mendes.

The events, organized by Alentejo Regional Development Agency (ADRAL), with the support of TAP Air Portugal, aim to promote Porto, in northern Portugal, and Alentejo in central Portugal, as tourism destination as well as areas to boost business opportunities for companies in both sides of the Atlantic.

According to Jayme Henriques Simões, Public Relations Coordinator at Louis Karno & Company Communications, based in Concord, New Hampshire, “Portugal is one of the hottest travel markets in Europe today and most North Americans want to learn more about its food, culture, and sites. By introducing key travel agents in 5 direct flight cities to Porto, the North and the Alentejo, we are helping to build the national brand and show that this is a destination people want to visit time and time again.”

The agenda for the promotional mission includes five events, with the participation of about 30 agents per event, with presentations and work meetings. 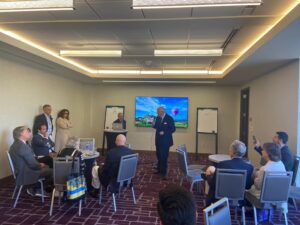 “These will be very intense, and very important, working days for the intensification of business and tourist flows between the North American market and Portugal, with topics such as the strengthening of air connectivity, new commercial agreements, crossing marketing, and intensified work with Portuguese communities residing in the cities where the action will take place,” a press release stated.

For Luís Pedro Martins, president of Turismo do Porto e Norte, “Portuguese-descendant communities are great allies in the international promotion effort, not only because of the knowledge they have about the behavior of the market where they live, but also because they are our best ambassadors, many of them being leaders in the territories that welcomed them, and opinion makers that can be strategic for the promotion of Porto and the North.”

The United States and Canada, are among the most important tourism markets for the Porto and Alentejo regions. Porto and the northern region of Portugal, ranked eighth in 2019 for tourism originated in the United States, while Canada is still considered an emerging market ranking 11th in 2019. They rank at the Top 10 of the most important international markets for the Alentejo.

The Alentejo is a vast province that runs from the Tejo River Valley to the mountains of the Algarve, and from the Atlantic to the border with Spain. Home to Atlantic beaches, cork forest, wineries and olive groves, there is hiking, cycling, and peace. Here there are small fishing villages, fortified towns, and ruins dating back millennia. The food is fresh and seasonal — and the countryside is open, wild and easy to explore. Here there are untouched coastline, wineries and horse farms. Stress just seems to melt away. All this less than one hour from Lisbon.

Porto is Portugal’s second city, rising above the lovely Douro River. Not only does Port wine take its name from Porto, but so does Portugal. Porto has it all; wonderful eateries, grand churches and palaces, bright tiles and distinct architecture — and it runs from the banks of the Douro to the shores of the Atlantic, a path that is easily enjoyed in the city’s local trolleys. The North of Portugal is home to some of the world’s great wines, from Vinho Verde to Douro – and a host of vibrant cities, exceptional parks, rugged mountains, and the most breathtaking wine country on the planet. Green, breathtaking and home to the Douro River Valley, the North is a pleasure to explore.