Travel: Portugal holds one of the most powerful passports in the world – Henley & Partners 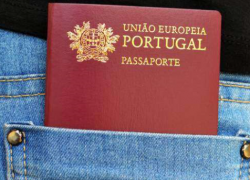 A Portuguese passport holder owns one of the best passports in the world, according the 2018 Passport Index released by Henley & Partners, a prestigious international consulting firm.

In 2018, Portugal moved from sixth (2017) to the fifth place in the Henley & Partners passport index.

The ranking evaluates passports according to the number of countries where it is possible to travel without having to present a visa or to request a visa upon arrival.

Accordingly, Portuguese passport holders can travel to 173 countries without a visa or a visa upon arrival. In the index, Portugal shares the fifth place with the United States, Ireland, and South Korea.

Germany ranks 1st in the passport index, its citizens allowed entering 177 countries without a visa, followed by Singapore, which moved from  4th to 2nd place.

With the European countries commanding the ranking, Denmark, Finland, France, Italy, Sweden and the United Kingdom share the 3th place with Japan in Asia.

The 4th place is shared by Austria, Belgium, Luxembourg, the Netherlands, Spain and Switzerland.

Ukraine (44th) and Georgia (53rd) are the highest climbers on the index, moving up by 15 and 14 ranks, respectively, following their recent visa liberalization with the EU.

Pakistan, Syria, Iraq, and Afghanistan occupy the bottom four ranks on the 2018 index, each having visa-free access to 30 or fewer countries. Afghanistan ranked last (allowed into 24 countries), preceded by Iraq, Libya and other countries in the Middle East.

North Korea fell from 94th to 95th (alongside Ethiopia and South Sudan) with a total of 104 countries, and Russia moved from 51st to 48th.

The Henley Passport Index is the most authoritative passport index. Based on  data from the Transport Association (ATA), it is “relevant to anyone seeking to strengthen their level of access as well as to governments trying to understand their passport power in a global context.” according to the