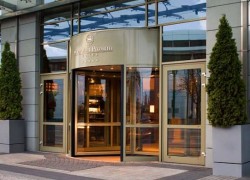 Starting January 1, the city of Lisbon will charge a one-euro-a-day revenue municipal tax (Taxa Municipal Turística) to tourists staying overnight in Portugal’s capital city. The new municipal tax was approved in December 2014 by the city administration.

The new tax will be applied to both foreign tourists and Portuguese nationals, including Lisbon residents, who choose to stay overnight at the city’s hotels or other public accommodations. The charges, paid directly by customers to the hotels, will be collected by the city as revenue.

Exempt from the new municipal tax are children under 13 years old; people who stay overnight in the city for medical treatment; and people identified as guests of organizations or institutions.

Starting in April, 2016, an additional municipal revenue tax to be determined will be also applied to visitors on arrival through Lisbon airport.  The tax was scheduled to start January 1, but is on hold pending from ongoing negotiations with the ANA [Aeroportos de Portugal] and the central government. A tax to be levied to tourist entering Lisbon by sea is also being considered.

This coming year, the municipality of Lisbon hopes to raise an estimated €15.7 million in revenue from the new municipal tourist tax, to finance investments in the city.