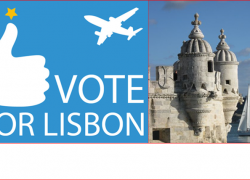 If love Lisbon, this is the opportunity to cast your vote and let the world know!

For the 4th year, European Consumers Choice is inviting the public to select the 20 European Best Destinations for the year.

Lisbon was voted Best European Best Destination in 2010, Copenhagen in 2011, and Porto 2012. A city cannot be elected “best destination” twice over a period of two years.